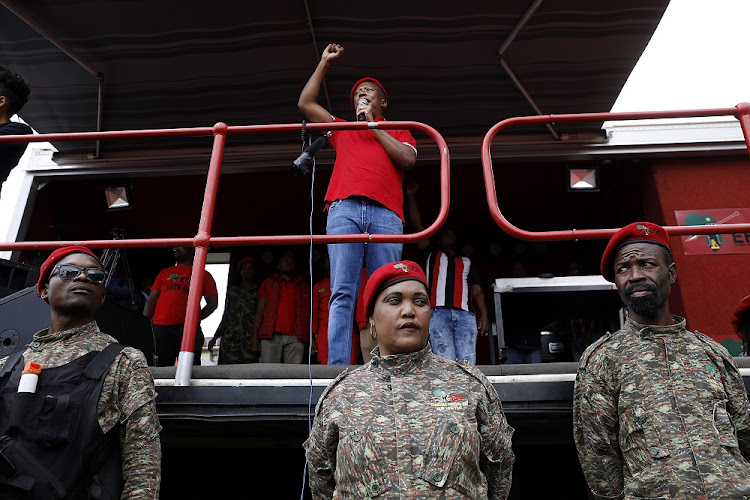 EFF leader Julius Malema addresses party supporters gathered outside the Zondo commission of inquiry into state capture in Parktown, Johannesburg. It was here that he singled Ranjeni Munusamy out for criticism.
Image: ALON SKUY

On the evening of November 23, Tiso Blackstar political journalist Ranjeni Munusamy was at a Johannesburg store when three men she did not know started "mocking" her as she was shopping.

When she walked out of the shop, the trio was waiting for her.

"As I passed them they hissed at me and shouted my name," Munusamy said of the distressing incident.

This happened in the weeks after EFF leader Julius Malema singled her out for criticism, and accused her – during a live media briefing and in front of EFF supporters protesting outside the state capture inquiry hearings – of being part of an "Indian cabal", being a "politician" and protecting minister Pravin Gordhan and President Cyril Ramaphosa’s political interests.

Sanef has lodged a complaint at the Equality Court against the EFF and its leader Julius Malema.
News
3 years ago

"One of the consequences of Mr Malema’s election to single me out is that every time he publicly attacks me, my Twitter account is flooded with abusive and threatening tweets from his supporters.

"I’ve been called a witch, a c**t, a snake, an achaar-eating bitch and a street girl, was told to 'go hang' and have been accused of being a racist. I have also been told I should be 'f**ked in the arse to be taught a lesson'," Munusamy said.

Details of the attacks and abuse come from an affidavit submitted by Munusamy as part of an Equality Court complaint lodged by the SA National Editors Forum (Sanef) against the EFF and Malema. The case, Sanef said on Wednesday, was in a bid to halt threats and harassment directed at journalists.

"We did not take this decision to institute legal action against the EFF lightly," Sanef said in a statement. "We believe in the South African way of resolving disputes around a table, but Sanef has been unsuccessful in seeking a meeting with Mr Malema and other EFF leaders about the remarks which we view as blatant hate speech."

Sanef said it had approached the court under the banner of defending media freedom and seeking protection for journalists.

"Women journalists in particular have borne the brunt of an avalanche of insults levelled against them, particularly on social media," Sanef said.

Munusamy is joined by journalists Pauli van Wyk, Adriaan Basson, Max du Preez and Barry Bateman as co-complainants – along with Sanef – in the case. They all detail similar stories of abuse at the hands of EFF supporters online.

They want the court to interdict Malema and the EFF from:

In an affidavit, Sanef chair Mahlatse Mahlase, said: "The conduct of the respondents [the EFF and Malema] in threatening journalists and in condoning the repeated threats and intimidation by their supporters against journalists, expressly or by remaining silent, has enabled or created an environment in which the abuse, intimidation and harassment of journalists is encouraged.

"The conduct of the respondents … constitutes hate speech. It also constitutes an unjustified violation of section 16 of the constitution which protects freedom of expression, of the press and other media."

Initial attempts to get comment from EFF spokesman Mbuyiseni Ndlozi were unsuccessful on Wednesday.