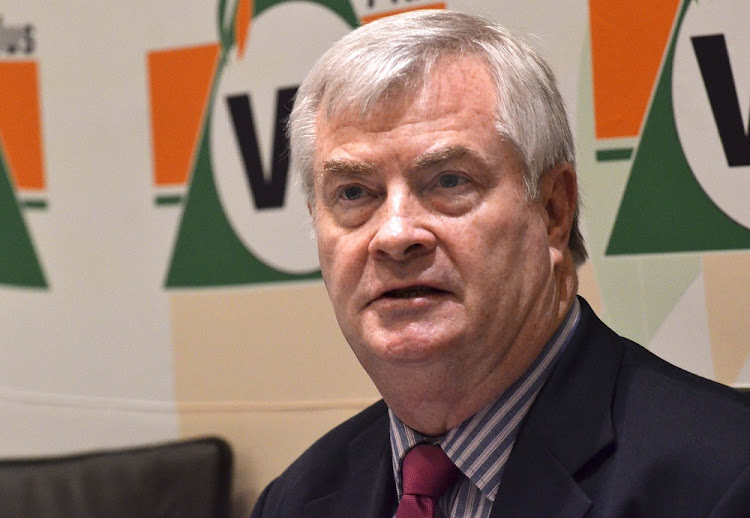 The Freedom Front Plus believes President Cyril Ramaphosa and his cabinet have failed dismally in 2018.

The passing of the expropriation of land without compensation resolution‚ which the party vehemently opposes‚ was the final straw‚ FF+ leaders said on Wednesday.

While vowing to fight expropriation without compensation to the bitter end‚ the party hopes‚ on the other hand‚ to benefit from this constitutional amendment if it goes ahead.

FF+ leader Pieter Groenewald said voters who were opposed to the proposed amendment were turning to his party as it continued to fight for their interests.

"It is favourable for the FF Plus. It plays a major role as people say‚ 'We must now look at FF Plus as people who are standing up strongly against expropriation without compensation'‚” he said.

Groenewald said that for the first time people realised that they could lose their property after investing "everything" in it - and which was also meant to be inheritance for their children.

He said that in community meetings‚ people were disillusioned with the government.

"They didn't really think it's possible and especially when it comes to Cyril Ramaphosa. In fact‚ I still get some people who say‚ 'He will not allow it.'

The National Assembly has adopted a report which will see the constitution be amended to allow for land expropriation without compensation.
News
3 years ago

Groenewald‚ whose party received about 165‚000 votes in the 2014 general elections‚ is targeting a million votes next year‚ especially from those who are disgruntled about the proposed constitutional amendment.

The party was addressing journalists about its annual evaluation of how the ANC government had fared over the past year. It highlighted Ramaphosa's late night statement in July that the ANC was going to propose a constitutional amendment to make provision for expropriation without compensation as being among his worst moments.

"With this‚ he put the interests of the ANC before the interests of all South African citizens. The announcement also showed disregard for parliament's constitutional review committee which was already busy with the process of conducting public hearings on the matter‚" said Groenewald.

Political parties opposed to the amendment of section 25 of the constitution have hinted that they will take the process on legal review to have it ...
News
3 years ago

The FF Plus also accused Ramaphosa of failing to promote nation-building and unity in SA‚ despite it being a constitutional imperative for a president.

"But with his controversial statements in which he keeps referring to white people as the cause of all the problems in South Africa‚ he is actually bringing about polarisation."

Groenewald also had a gripe with Ramaphosa for failing to strongly condemn Black First Land First leader Andile Mngxitama for "his hate speech against white people".

"And then in a Radio 702 interview‚ shifting the attention to white people allegedly being racists who have to be isolated and white people being lazy in the economy‚" said Groenewald.

He said these and Ramaphosa's hesitation to get rid of ministers like Bathabile Dlamini - and instead praising her as an excellent minister‚ despite the fact that she had committed perjury in the Constitutional Court - and his delay in signing the Political Party Funding Bill‚ had contributed to his poor performance.

The ANC has conceded that it will be impossible to pass the constitutional amendment bill before next year's elections.
News
3 years ago

The FF Plus awarded the entire cabinet an F symbol [0%-29%] for overall poor performance in 2018.

The party said cabinet ministers should collectively take responsibility for how the country is governed‚ and cited unemployment as "the biggest crisis" facing the country due to a poor economy.

"South African citizens' greatest need is to have a job and a stable income‚ and the government is failing the people in this regard. Unemployment is a crisis. At present‚ South Africa has the highest youth unemployment rate with 57‚4% of the country's youth jobless.”

Groenewald accused the government of failing to establish investment certainty‚ particularly with the adoption of the principle of expropriation without compensation. The government also failed to create a favourable environment in which the private sector could contribute to job creation‚ he said.

The return of load shedding‚ which had had a detrimental effect on the economy‚ and the debt owed to Eskom by municipalities were more governance failures highlighted by the FF+.