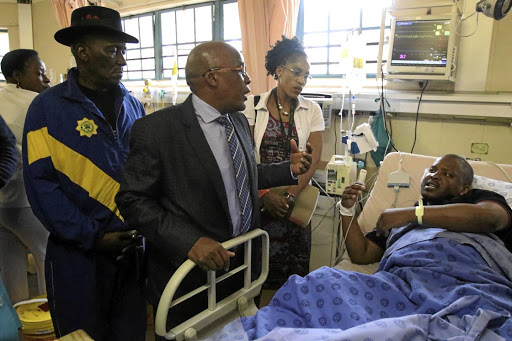 Employees at Letaba Hospital outside Tzaneen, Limpopo, have asked for the services of the institution's security company to be terminated.

This follows an incident in which robbers entered the premises at night and attacked doctors at their residences, injuring them before robbing them of their valuables.

Sammy Shipalane, a porter who had been working at the facility for 27 years, said it was pointless to have the security guards when robbers could gain easy access.

"No one is safe at this hospital, even in the presence of the security guards," said the 50-year-old man.

He was among a group of employees who protested during a visit by health minister Aaron Motsoaledi and his police counterpart Bheki Cele on Friday.

The two were assessing the circumstances under which the robbers had entered the hospital's premises and shot and injured two doctors, including the wife of one of them, before robbing them.

According to Shipalane, an unknown man had entered the institution "without being searched" and stabbed a cleaner earlier this year.

"The same attacker was allowed to leave the institution after nearly killing one of us. How can we feel safe under this kind of a situation?" he asked.

Stone Gayisa, 44, a ward attendant said it was demoralising to work under unsafe conditions at the hospital.

The National, Education, Health and Allied Workers' Union (Nehawu) in Limpopo said there was a need to insource security in all health facilities.

Police spokesperson Brigadier Motlafela Mojapelo said yesterday that no one has been arrested in connection with the attacks on doctors at the Letaba Hospital on Thursday and Lebowakgomo Hospital on Saturday.

A reward of R100,000 has been offered for any information that could lead to the arrest and subsequent conviction of anyone responsible for the attacks.

Meanwhile, an alleged robber was gunned down during a shootout with the police while attempting to attack a clinic in Limpopo.

The incident happened in Manganeng village outside Jane Furse in the Sekhukhune yesterday morning.

Motsoaledi said a group of four men approached a security gate at the Manganeng Clinic pretending to be accompanying a patient. He said a female security guard was disarmed and that police officers who were deployed to the area had reacted swiftly and gave chase to the would-be robbers.

The minister believed the men were part of a syndicate targeting health care facilities in the province.