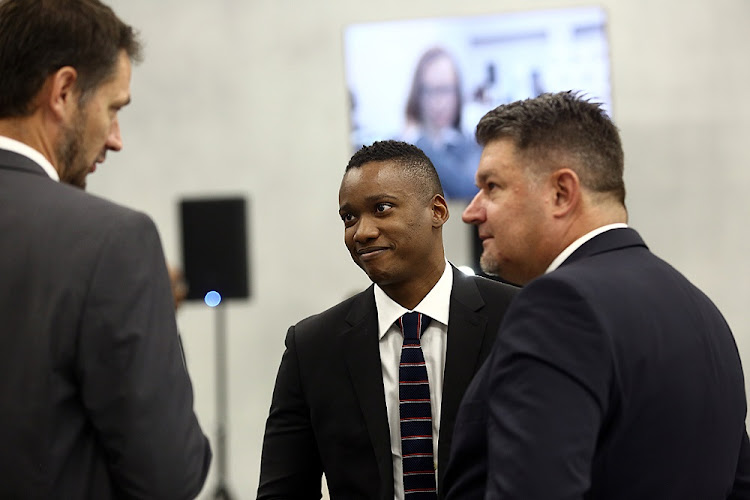 Duduzane Zuma smiles as he listens to his lawyers at the state capture commission on Wednesday.
Image: Masi Losi

Duduzane Zuma’s legal team has raised a grievance with the commission of inquiry into state capture‚ saying it is prejudicial that they were informed only one day before that former deputy finance minister Mcebisi Jonas would not be available for cross-examination.

Zuma’s legal team successfully applied to cross-examine Jonas‚ who earlier testified that the former president’s son was present at a meeting where a member of the Gupta family offered him the job of finance minister plus a R600m bribe.

It was expected that Jonas would be cross-examined on Wednesday‚ but he successfully applied for a postponement. The application was served on Duduzane Zuma’s lawyers only late on Tuesday afternoon. Representing Zuma jr‚ Piet Louw said this was "severely prejudicial".

"I am only here to raise a grievance. It is severely prejudicial for him (Zuma). He has travelled from abroad to be here. His wife is expecting a baby by the end of this month and his presence is elsewhere required after today‚" Louw said.

Deputy chief justice Raymond Zondo‚ who is chairing the commission‚ said Jonas’s application should have been served to Zuma’s legal team.

It is severely prejudicial for him (Zuma)

"I regret that there was this inconvenience caused. I postponed the hearing of Jonas to November 26. I have suggested that the three legal teams should have a conversation with regard to what would happen‚" Zondo said.

There was another issue around the appearance of Mzwanele Manyi on Wednesday.

Manyi was expected to give evidence before the commission on November 23‚ but had received a notice that there was an opening on Wednesday. The notice is believed to have been issued erroneously.

Manyi will testify on November 23.

The former government spokesperson has been an outspoken supporter of former president Jacob Zuma.

He tweeted that former minister Barbara Hogan had lied to the commission on Tuesday.

Former president Jacob Zuma’s son Duduzane arrived unexpectedly at the Commission of Inquiry into State Capture in Johannesburg.
News
3 years ago
Next Article