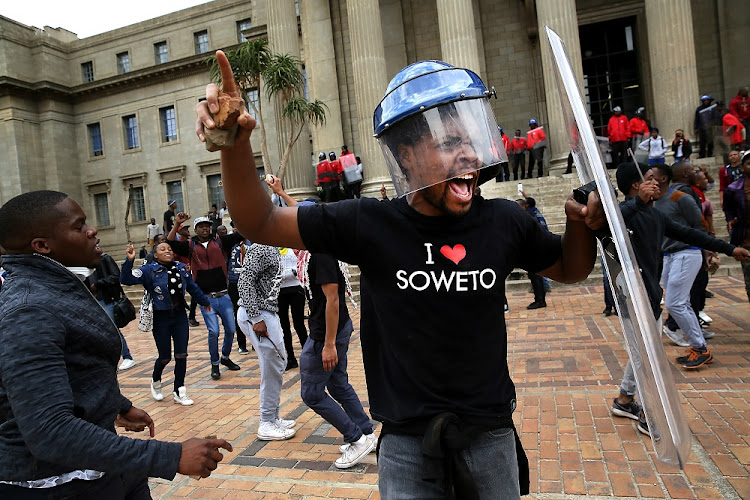 Mcebo Dlamini during the #FeesMustFall protest at Wits University where he got arrested.
Image: ALON SKUY

Student activist and #FeesMustFall campaign leader Mcebo Dlamini says he is confident his trial will finally start on Friday.

Speaking outside the Johannesburg Magistrate's Court ahead of his appearance‚ Dlamini told the publication that the case had been set down for a pretrial and that his team was ready.

"Today we are proceeding. There can't be any details‚” said Dlamini. “You see I even brought [Advocate] Tembeka [Ngcukaitobi] today. I brought big guns. I'm not playing.

"If the state is not ready today‚ then the case must be struck off the roll."

The law student faces a string of charges‚ including theft‚ assault‚ public violence and malicious damage to property linked to student protests in October 2016.

His case has been postponed several times in the past‚ for numerous reasons.

In August the case was postponed to give President Cyril Ramaphosa time to decide whether to pardon Fees Must Fall activists. A week before his court appearance‚ Dlamini penned a letter to Ramaphosa and walked from the Wits campus in Braamfontein to the Union Buildings in Pretoria‚ where he handed it to Ramaphosa’s office.

In the letter‚ Dlamini urged Ramaphosa to exercise his prerogative powers and grant amnesty to all Fees Must Fall activists.

Dlamini remains confident that Fees Must Fall activists will be pardoned.
News
3 years ago