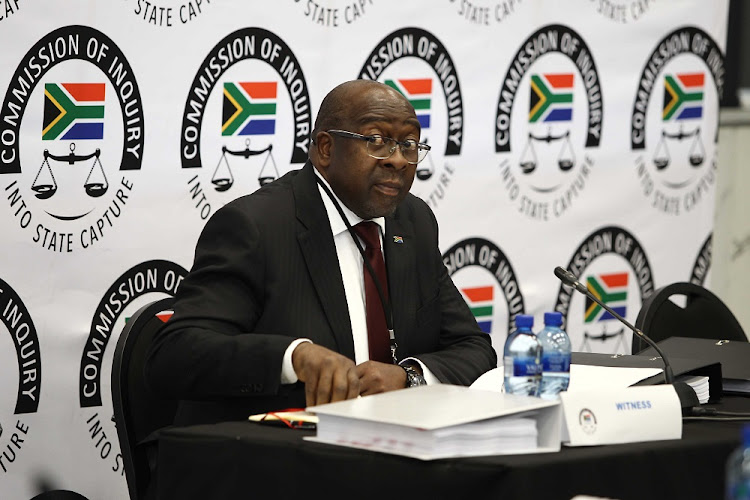 Nhlanhla Nene, minister of finance is seen at the commission of inquiry into state capture that is chaired by the deputy chief justice Raymond Zondo.
Image: Thapelo Morebudi

Former president Jacob Zuma scolded finance minister Nhlanhla Nene at a Brics summit in Russia for not concluding the financial arrangements of the nuclear deal.

Testifying at the Zondo commission into state capture‚ Nene said that at a Brics meeting in Ufa‚ Russia‚ in July 2015‚ Zuma told him that he wanted the nuclear documents finalised before he met with Russian president Vladimir Putin.

“Mr Zuma criticised me for not finalising the financial aspects of the proposed nuclear deal with Russia. Mr Zuma said he was not happy that I was not doing what I was supposed to have done a long time ago so that he could have something to present when he meets President Putin for their one-on-one meeting‚” Nene said.

“I told President Zuma in the meeting that I could not sign the letter without having first interrogated the financial and fiscal implications and proposed funding model.”

“Although it was couched in letter form‚ I was reluctant to sign as my signature would have resulted in a binding financial commitment by the South African government. I said to Ms Joemat-Pettersson that I would not append my signature but if she wants to sign it‚ she must go ahead alone but I cautioned that whatever she ultimately signs should not have any financial commitments‚” Nene said.

Nene said Joemat-Pettersson insisted that it had to be a joint decision of both the ministers of energy and finance. She later brought him a revised letter.

“I recall reading it and concluding that the fiscal and financial implications remained. I rejected the letter again‚” said Nene.

He said as a result of his refusal to sign the letter‚ he was “seen as the person standing in the way of the nuclear deal”.

“I was accused of insubordination‚ not only by the President but by some of my colleagues. I recall that the attitude of my colleagues‚ particularly the Minister of International Relations Minister Maite Nkoana-Mashabane and the Minister of State Security Minister David Mahlobo was hostile. They wanted me to sign and felt that it was not right that the issues on the nuclear deal had not been finalized‚” Nene told Judge Raymond Zondo.

He said on his return from Russia‚ he was told by former deputy finance minister Mcebisi Jonas that the president was unhappy with him.

“He told me that he had been called to a meeting with Mr Zuma in which Mr Zuma expressed dissatisfaction with me‚ particularly the stance that I took on the nuclear procurement process in Ufa and my refusal to sign the draft letter presented by Ms Joemat-Pettersson‚” said Nene.

“Who are they to offer you the job of Minister?”
News
3 years ago