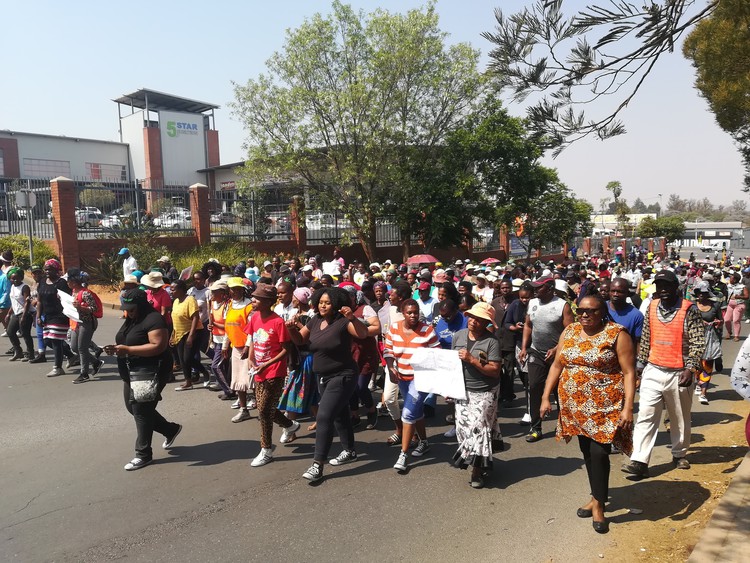 The community of Zandspruit marched against crime in the area
Image: Zoë Postman

On Wednesday morning hundreds of residents of Zandspruit informal settlement in the west of Johannesburg marched to Honeydew Police Station in Roodepoort to demand better policing in their community.

The memorandum said the community was concerned about the number of pending cases‚ the lack of police visibility‚ police corruption‚ dysfunctional community policing forums and the lack of trust between the community and the police.

The community demanded that the satellite police station be reinstated‚ police visibility be improved‚ police response be faster‚ taverns and shebeens be forced to close after hours and the community be taught about their role in the community policing forums. The memo also said Member of Executive Council (MEC) for Community Safety Sizakele Nkosi-Malobane must establish a task team to look into pending cases and poor service from Honeydew Police Station.

“We‚ the women‚ children and community at large‚ day by day are living in serious fear of being victims of crime. Perpetrators are roaming free in our streets even though community residents alerted the officials‚” read the memorandum.

It said the community was tired of the lack of service and it would resort to “acts outside of the confines of the law” if nothing was done about it. “We don’t want to go that route hence we demand intervention before hell breaks loose‚” read the memorandum.

John Msimanga is a community leader who has lived in Zandspruit for about 20 years. He said the crime has worsened over the years and the police have not been responsive. He said the community no longer has control over who builds shacks in the area which has led to an increase in crime.

“You can come from Limpopo where you killed someone and set up your shack in our community and we can’t even ask for your documents to check who you are‚” said Msimanga. He said the community needed the police to be visible in the area to deter criminals from coming to live in Zandspruit.

“The other problem we have is that we know who the criminals are but when we call the police‚ they do not arrive or they will take five hours to come when the suspect is already gone‚” he said.

Another resident‚ Zodwa Ngele‚ said she was “sick and tired of this police station”. She said her niece’s daughter was murdered in 2012 and her body was found in bushes .

“Since then we have heard nothing about our case from this police station. They don’t call. They don’t tell us what is going on … We gave them the lead that she was with another girl before she was killed and we asked them to follow up‚ but still nothing has happened‚” Ngele told GroundUp.

Sonnyboy Mmatli‚ a representative from the MEC for Community Safety’s office‚ signed and received the memorandum.

He urged everyone with pending cases to provide the community leaders with their case numbers so that the police could give a detailed report on the progress of the case or what happened to it.

He said the Gauteng Department of Community Safety was committed to working with the community to improve the policing and promised to respond to the memorandum within seven days.