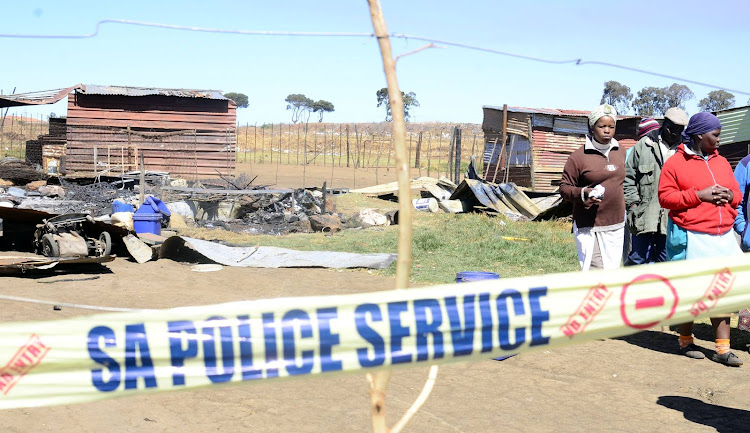 The scene where seven relatives including a baby lost their lives in a shack fire at Senthumile informal settlement.
Image: TIRO RAMATLHATSE

Seven family members perished in a fire believed to have been caused by a candle at Koster, North West, at the weekend.

It was believed their two- roomed shack at Senthumile informal settlement burnt down after candle ignited the fire.

Debogang’s boyfriend, Olebile Mere, said yesterday that Mafoko and Debogang had left the children under the supervision of Boikanyo and they all went drinking at a local tavern.

He said when they returned home, there was a candle on the floor near a curtain, the window was still opened and all the children were asleep.

“I left them there and warned them to blow off the candle before they sleep,” he said.

Mere said while he was sitting at his house later, which is about 300m from the Mafoko’s house, he saw flames.

“I rushed back to check on which house was burning. I found them all dead,” he said. “Police and the fire brigade were called but at that time nothing could be done.”

Mere said he was finding it difficult to deal with the situation.

She said police received the call about the shack fire around 1.30am on Saturday.

“It was discovered that seven persons burned to death. It is suspected that a candle was the cause of the fire since there is no electricity in the area,” Botma said.

Boitumelo’s father, Tom Mokone, said it was difficult to let what happened sink in.

“I have never seen something like that. I am hurt because when I received a call that the shack was on fire, I did not expect to find what I saw,” Mokone said.

He added he could not recognise anyone because the bodies had shrunk as a result of the raging fire.

Talking from a sofa in his house, about 500m from were her daughter lived, he said Boitumelo and the children used to visit him but no one dropped by this past weekend.

“They normally come and eat here because no one was working in that house, so I was still supporting them.”

Their neighbour, Jan Khuthedi, said if there was enough water in the area they could have managed to save some of the family members.

In the same informal settlement two years ago, a man set alight a shack and burnt seven people, including a toddler and a grandmother, to death after he had an argument with his girlfriend. Petrol was used to set the shack on fire.