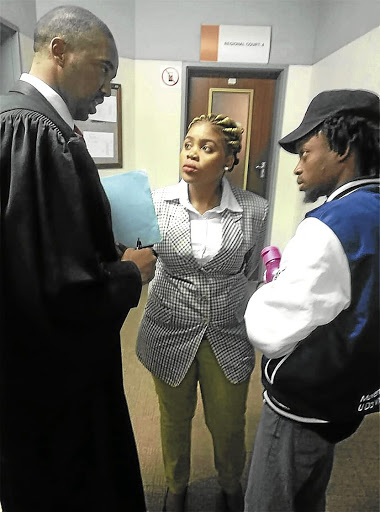 Attorney Asanda Pakade consults with Sibongile Mani, as Vusi Mahlangu, of Pasma and an Outsourcing Must Fall activist looks on. /MALIBONGWE DAYIMANI

In less than two hours after the erroneous transfer of R14-million into her account by the National Student Financial Aid Scheme (NSFAS) on June 1 2017, Sibongile Mani had spent R20000 on "prohibited" items such as cigarettes and alcohol.

This is according to a four-page charge sheet which was seen by Sowetan's sister publication the Dispatch for the first time during Monday's quick hearing.

The theft trial against the third-year accounting student at Walter Sisulu University was postponed to October 25.

Mani is charged with theft of R818469 she spent after R14.14-million was transferred into her account as a result of a "systems error", according to the charges.

Between June 1 and August 14 when the error was noticed, Mani had spent R818469 at 48 merchants in the Eastern Cape and Gauteng.

Mani spent R174631 over a period of a "few days" at Checkers Hyper in Centurion.

"Prohibited" items [those that NSFAS does not allow students to buy] to the value of R286108 were purchased. This included alcohol, cigarettes, electrical appliances, bedding, airtime, gift cards, toys and microwaves.

The charge sheet also states: "During each of her purchases over the period, she was provided with a receipt that showed her current balance.

The charge sheet also says Mani renamed herself on her social media account to "Sibongile Money", and that she published pictures of her receipt showing the huge sum.

"The accused knew at all times that she was only entitled to a food allowance of R1400 and the credit she had received on 1 June 2018 of R14.1-million was incorrect, it did not belong to her and she was not entitled to spend it.

"The accused did unlawfully and intentionally steal R818469 as described in the preamble to the charge sheet."

Yesterday, Vabaza said due to congested court schedule, an earlier date could not be found. Mani was arrested by the Hawks on May 29 2018 after student fund distributor Intelimali had opened a theft case on September 5 2017.

Mani is accused of failing to report the alleged "error" and instead spent R818469 in 73 days.