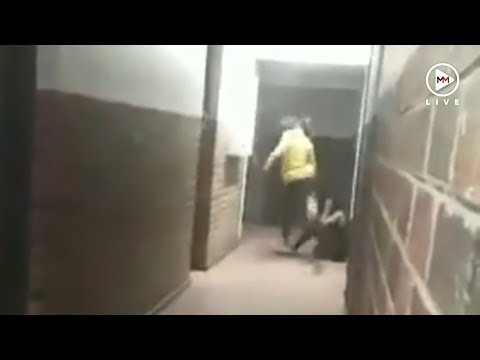 A female student who was filmed being mercilessly kicked by a male at the University of Fort Hare’s Alice campus has reportedly decided not to lay charges.

Fort Hare SRC president Xolani Jaji told SowetanLIVE that the student was in a relationship with her attacker.

"She doesn't want to lay charges because she says she was the first to assault him - but the university will be taking action against him‚" said Jaji.

A video depicting the assault has since gone viral. Be warned‚ the video – published below - is not for sensitive viewers.

It shows the woman on the ground as her attacker towers over her‚ slapping her around. She gets up and walks behind him‚ while he hurls insults at her. Bystanders are recording the incident on their cellphone.

The couple continues to argue and the young man drifts out of camera shot while the woman is heard continuing to shout at him.

A few seconds later‚ the man is back on shot and is seen kicking the woman in the chest‚ sending her flying across the corridor. He places another kick to her face as she lies on the ground.

"Leave her alone! This is a woman‚" bystanders shout‚ saying before two of them walk towards the injured woman.

University spokesman Khotso Moabi said they had immediately taken action against the woman’s attacker. He said police and university campus security had been deployed to search for the youngster shortly after the video went viral.

"He was apprehended‚" said Moabi.

He expressed regret that such an incident took place‚ especially amid heightened efforts to curb gender-based violence.

The university was currently working on a policy to address gender-based violence on campus‚ Moabi said.

Police told SowetanLIVE that they had been in contact with both the victim and her attacker.

"Contact has been made with the alleged victim and the perpetrator‚ who was also allegedly assaulted by the friends of the victim. Both have indicated that they are not opening cases.

“However‚ SAPS has not closed the doors for either or both of them to come forward to open cases when they are ready‚" police said in a statement.

Meanwhile‚ the Alice policing cluster commander‚ Brigadier Piet Wolvaard‚ said he hoped the victims would open cases after they had received counselling.

University of Fort Hare student raped while walking to campus

A female student from the University of Fort Hare in the Eastern Cape has become one of the latest victims of rape at or near a tertiary institution.
News
3 years ago

He said he was concerned that‚ in many instances‚ people opened assault cases but returned to the police station a few days later to close the cases.

Although the woman in the Fort Hare assault case had reportedly decided not to take action‚ that did not stop students from taking action against her attacker.

Another video on social media showed the young man‚ dressed in the same clothes he wore during the attack‚ being accosted by a group of women.

"He should be beaten‚" some are heard saying as they surrounded him.

One student is heard addressing the others.

"We have brought this woman-beater to come and ask for forgiveness from you‚” she said.

"Give him to us‚" one female is heard shouting from the crowd‚ speaking in IsiXhosa. "He was showing his karate moves yesterday! Give him to us now.”

Another video showed scores of female students marching across the campus with the young man. The group was singing and ululating as he walked ahead of them‚ his head bowed down with his dreadlocks hanging across his face.

The man was reportedly led across the campus‚ where he issued an apology to all the women.

Khensani Maseko's friends‚ fellow students and the Rhodes University vice-chancellor praised her as an "incredible" leader.
News
3 years ago
Next Article