Standing up against abuse - Cyril meets protesters at Union Buildings 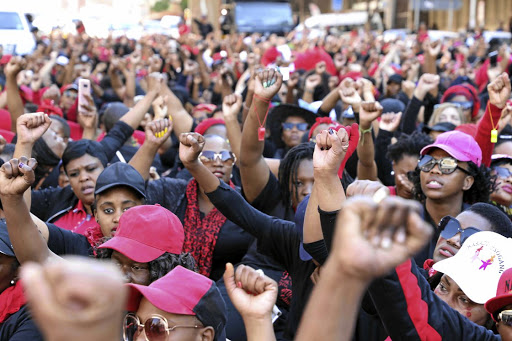 Thousands of women marched to the Union Buildings in Pretoria to protest against gender-based violence under #TotalShutdown movement.
Image: Thulani Mbele

A woman whose daughter died when her husband doused them with petrol and set them alight eight years ago, joined thousands of women in the Total Shutdown march in Pretoria yesterday.

Thembi Maphanga, 40, a mechanical engineer who lost her two-year-old daughter in the incident at her Mpumalanga home in 2010, said she had everything to march for.

Her daughter Keabetswe died from severe burns a few days later in hospital.

Maphanga said her husband paced up and down before he pulled out a five-litre bottle containing petrol. "Before I knew it he poured it on me and our daughter. We fought over the box of matches and he got the matches and set us on fire.

"I was devastated. My daughter died for something she didn't know and my husband was on the run."

She said her husband was convicted of culpable homicide and attempted murder and sentenced to 10 years, five of which were suspended.

"I'm here today because I am a survivor of abuse. Women should not stay in relationships if they are abused. I gave him too many second chances until he almost killed me and killed our daughter."

A document containing a total of 24 demands will be given to government‚ calling for action “now”.
News
3 years ago

Tshwane Metro police Senior Superintendent Isaac Mahamba said about 5000 women peacefully marched from the old Putco Depot in Marabastad. They were chanting Amadoda
yizinja (men are dogs)" and Senzeni na (what is our sin)?

When the women arrived at Union Buildings, a scuffle broke out as they pushed against the fence in an attempt to storm the seat of government, demanding that President Cyril Ramaphosa accept their memorandum.

A police officer was almost crushed against the gate as the women pushed with all their might but the officer managed to push back as his colleagues used pepper spray to get the women off the fence.

The women were enraged by the Presidency's decision to send Higher Education and Training Minister Naledi Pandor to accept their memorandum. The minister was not given a chance to address the protesters and was told to "voetsek. We want Ramaphosa. They are using women [Pandor] as always." 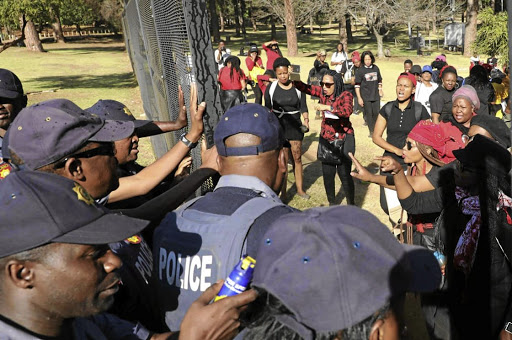 Tension broke out at the Union Buildings as women marchers tried to push their way through police at the gates.

Late last night Ramaphosa, who had been out of town, returned to the Union Buildings to meet the marchers. He apologised to the group of about 50 women who refused to leave the premises.

"Every point you have raised in this memorandum, I can assure that we will give and pay careful attention to them because you are raising very important issues," he said.

"You have made and are making a huge contribution to enable us as a country, as a nation and as men to be able to address the issue of gender-based violence," he said.

Another abuse survivor, Yolanda Dyanti, had the message "NO means NO" written in red across her breasts to drive her message home.

The 21-year-old said: "I am here to take a stance that my body and life matter. Government's stance on saying enough is enough is not enough because women are still subjected to systemic oppression."

Another woman, 48-year-old rape victim, Thandeka Finca from Cape Town, said: "I am here because I am a survivor of rape."

Finca said women were not living freely in SA because they were being beaten every day.

"They [men] need to deal with their anger issues.

"We do not hate [men] but we say we want to live in this country."