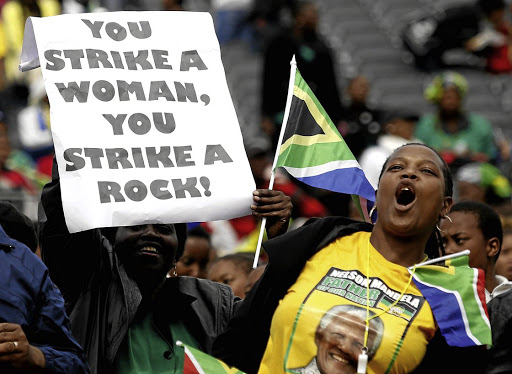 Women will march today under the banner of #TheTotalShutdown.
Image: Simphiwe Nkwali

The Young Women's Desk of the ANC Women's League will not back down from marching against gender-based violence in party colours despite objections to the move.

The Young Women's Desk is expected to hold marches across the country today, which will coincide with the widely publicised #TheTotalShutdown national demonstration.

Leaders of #TheTotalShutdown movement previously released a statement distancing themselves from the ANC-aligned march while criticising them for coming up with a "political ploy to detract from the seriousness of the plight that is gender-based violence".

"It cannot be that our lives are reduced to political fodder for political gain whilst women and gender-non-conforming individuals perish daily," the statement read.

However, Feziwe Ndwayana from the Young Women's Desk yesterday said it was unfair to dictate to women which colours they should wear. "Women are allowed to wear the colours they want," she said.

Ndwayana said they were not opposed to the other march because they aimed at spreading the same message against gender-based violence.

"We are not fighting them."

Ndwayana said they would meet at the Constitution Hill at 9am today and march to the ANC's headquarters at Luthuli House in the Johannesburg CBD.

ANC secretary-general Ace Magashule is expected to receive their memorandum.

"The Young Women's Desk decided to start the August month in a way which would be more impactful for women," Ndwayana said.