Support for Jacob Zuma at his trial begins to dwindle 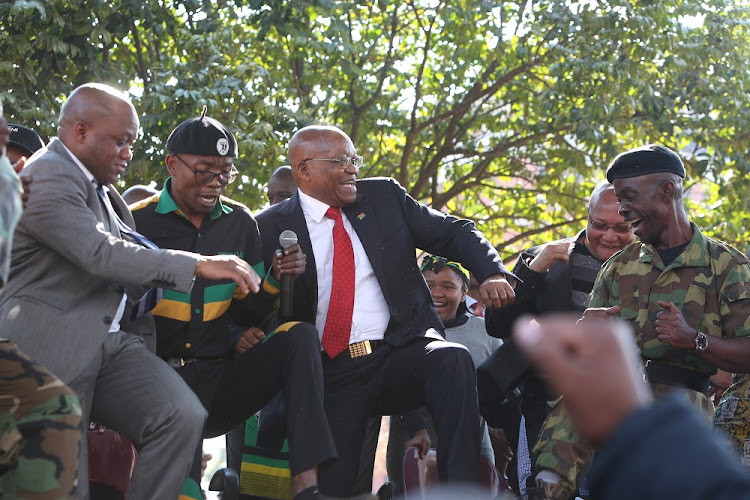 Former President Jacob Zuma dancing with KZN chairperson Sihle Zikalala and others after his appearance at the PMB High Court for his 3rd appearance on charges of fraud and corruption on Friday, July 27, 2018.
Image: Jackie Clausen

Support for former president Jacob Zumaby senior leaders of the ANC during his court appearances has dwindled.

On Friday, Zuma appeared in the Pietermaritzburg High Court in a matter related to French arms manufacturer Thales over a contract worth R30-billion, where he faces 16 charges of fraud, money laundering and racketeering.

None of them was wearing party regalia after the ANC national executive committee decided that party members who support Zuma at his court appearances should do so in their personal capacities.

Trial 'would just not be fair'‚ says upbeat Jacob Zuma

As if his court woes were not enough‚ former president Jacob Zuma was struggling with a bad bout of the flu.
News
4 years ago

None of them were at his court appearance on Friday.

uMkhonto weSizwe Military Veterans Association (MKMVA) treasurer-general Des van Rooyen, former minister of communications and public service and administration Faith Muthambi were the only politicians from outside the province.

Professor Susan Booysen said senior members of the ANC had accepted that the Zuma era was over and that President Cyril Ramaphosa would win the 2019 election.

Booysen added that although KZN was historically supportive of Zuma, the lack of visible ANC support shown might be connected to ANC members looking out for their own interests in the lead-up to the 2019 election.

Former president Jacob Zuma is likely to get a sense of déjà vu when he appears in the Pietermaritzburg High Court.
News
4 years ago

Dr Somadoda Fikeni said the reasons for Zuma support declining might be because passions were cooling.

"If you are an incoming president it is easier to draw crowds because of the patronage that can be given. But if you are on the exit, then your status has lowered," he said.

He said Zuma supporters were also aware that they would be unlikely to get lucrative posts if they were seen as controversial by the ANC
national executive committee.

Zuma's case was postponed to November 30.