Trial 'would just not be fair'‚ says upbeat Jacob Zuma 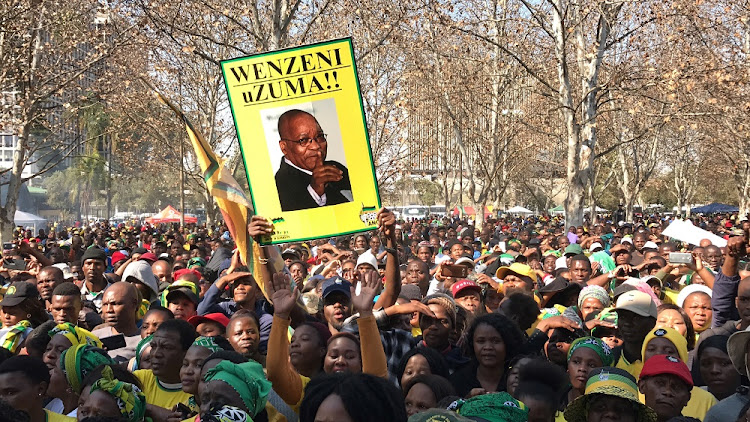 Crowds of Jacob Zuma supporter holding a placard with words 'wenzeni uZuma' outside the Pietermaritzburg High Court for his third appearance on charges of fraud and corruption on July 27 2018.
Image: Jackie Clausen

As if his court woes were not enough‚ former president Jacob Zuma was struggling with a bad bout of the flu.

But that didn't keep him down for long on Friday when he appeared before hundreds of supporters who had gathered in Freedom Square‚ which flanks the Pietermaritzburg High Court.

Zuma told his supporters that he was struggling with his voice because of his flu‚ but he still managed to fire shots at his detractors. The former president talked tough‚ making veiled threats that he would one day reveal all about the plot to prosecute him.

Zuma seemed to have been buoyed by his newly appointed lawyers‚ saying his legal team would thwart the latest attempt to charge him.

“These lawyers that I have with me now‚ because [former lawyer] Mr Kemp will retire‚ don’t mess around. They are not afraid to go trial‚ but it would just not be fair if we did‚” he said.

Zuma faces graft charges relating to alleged malfeasance in the controversial arms deal‚ with charges reinstated almost a decade to the day when he was first hit with charges.

His appearance before Judge Isaac Madondo was brief on Friday‚ with his new legal representatives telling the court that they intended to apply for a permanent stay of prosecution.

“This trial is never-ending and it is always there‚” said Zuma. “What we can say is that justice delayed is justice denied.”

Jacob Zuma's new legal team has told Judge Isaac Madondo that the former president will not stand trial for corruption and fraud.
News
2 years ago

He waded through the day’s proceedings with his supporters‚ once again proffering the narrative that he was being victimised.

“It was thrown out of court twice before. They said this case is not firm. It was them [judges] who said it and not me‚” said Zuma.

“I can’t wait to see who the witnesses are that were there when I committed these crimes‚ but the lawyers say it will get thrown out‚” he added.

The charges Zuma faces relate to 783 payments that he allegedly received as a bribe to protect French arms company Thales (also known as Thint) from an investigation into the controversial multi-billion rand arms deal. The alleged bribe was facilitated by Zuma’s former financial adviser‚ Schabir Shaik.

Despite battling with his voice‚ Zuma danced and sang to his trademark Umshini Wami.

He will appear in court again on November 30.

Jacob Zuma's new legal team has told Judge Isaac Madondo that the former president will not stand trial for corruption and fraud.
News
2 years ago

Former president Jacob Zuma is likely to get a sense of déjà vu when he appears in the Pietermaritzburg High Court.
News
2 years ago
Next Article