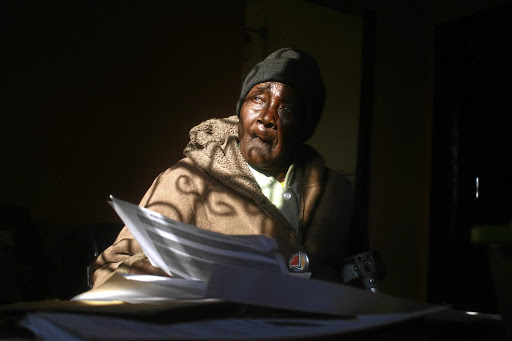 A 93-year-old pensioner says she was robbed of her four-roomed house by a former ward council official, who made her sign a fraudulent will.

Thoko Annie Nare of Tladi, Soweto said she was under the impression that the official, who was head of housing in the local council at the time, was helping her renew her ANC membership card when she signed her house away.

Nare said that it had since emerged that when they went to Naledi police station on March 16 2011 to sign an affidavit, it was to make the official a 100% beneficiary of her estate.

Nare said she had no idea what the official was up to.

He used the affidavit to change the title deed of the house to his name.

"He is a criminal, a big criminal. I trusted him and I believed he was helping me," she said.

Nare said she had made a will with her bank declaring that her property be taken over by her relative's child when she died.

Two councillors from the Walter Sisulu municipality are being tried for allegedly selling an RDP house to a member of the public for just over ...
News
3 years ago

This was after her husband and their only child died.

Nare said she only realised that her house was in a different name when she carefully studied her municipal bill in January. "I suffered for that house and he wants to take it away from me. I never agreed to give him my house. I want my family to take over the house," said an upset Nare.

Her granddaughter Busi Radebe said she feared the official would eventually win the house because the process of changing the title deed back to her granny's name was long and expensive.

He is a criminal, a big criminal.

She said her family of eight shared a four-roomed house and losing Nare's house would mean they would continue to suffer.

"We are very worried about that house. They took advantage of her loyalty to the party and tricked her. This is unfair," she said.

On Friday, ANC members in the area led by councilor Mpho Sesedinyane rallied behind Nare and marched to the Naledi police station to hand over a memorandum demanding that the official be arrested.

They opened a case of fraud and corruption against the official.

The department of housing at the City of Johannesburg said no one was permitted to change a title deed without the owner's consent.

Spokesperson Buntukazi Xuba said: "The woman is advised to open a case of fraud against the former (official) and even report this incident to our Group Fraud and Investigation Services unit. She can also write a new will which will deem the fraudulent will null and void."

Xuba said there would always be people who try and take advantage of the aged.

"As a department, we urge community members to be extra careful. They can always go to our housing offices and we will be able to advise on housing related matters and can always refer to the relevant structures where it is outside of our field of work," she said.