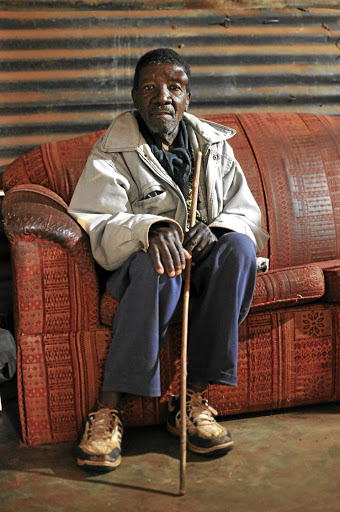 The elderly man who walked away empty-handed after labouring at a North West farm for 69 years has died.

A month ago Sowetan reported that Dinake, who turned 84 in May, had worked at Boet Terre'Blanche's farm in Nooitgedacht since he was 15.

When Dinake retired in October, Terre'Blanche failed to pay him a severance package.

This prompted the Department of Labour to intervene.

However in a bitter-sweet turn of events, Dinake died just after the department slapped his former employer with a compliance order instructing him to pay Dinake the moneys owed to him, amounting to R50000, within 14 days from last Friday.

Dinake had retired after working at Terre'Blanche's farm, earning a paltry R300 month.

He had initially been employed by Boet's father, Andries, who is now late.

The wage was in contravention of the minimum wage for farmworkers, which as from March 1, was R3169.

Dinake's daughter Stokkie told Sowetan yesterday that the family was yet to be informed by hospital officials on the cause of his death.

"His health started deteriorating on June 14, I took him to hospital, he became better and we came back home.

"However on Monday, my father once again fell ill and I called an ambulance. The paramedics said his blood sugar level was low and they stabilised him.

"On Tuesday morning he was admitted to hospital and unfortunately died," said a distraught Stokkie.

She said Dinake will be buried next Saturday and the funeral service will be held at the family home in GaMogopa village.

Stokkie said she would use the R3000 she is expecting from her stokvel to bury her father.

"My heart is extremely sore because he died without having received and enjoyed his pension."

Stokkie, however, said she was looking forward to the R50000 Terre'Blanche is expected to pay and said they would use it for the funeral if paid in time or they would erect a tombstone for her father.

Departmental spokesman Sithembele Tshwete said the compliance order related to Terre'Blanche paying Dinake wages which were below what was stipulated by the law.

"That R300 monthly salary was too low," Tshwete said.

"There's also a severance package for the years Dinake has worked.

"Basically it's just money owed by (Terre'Blanche) in terms of the contravention (of the sectoral determination law) for all those years.

"We've issued a compliance order for Terre'Blanche to pay all those moneys within 14 days, failure to do so, will result in the compliance order being taken to the labour court and be made an order of the court," he said.