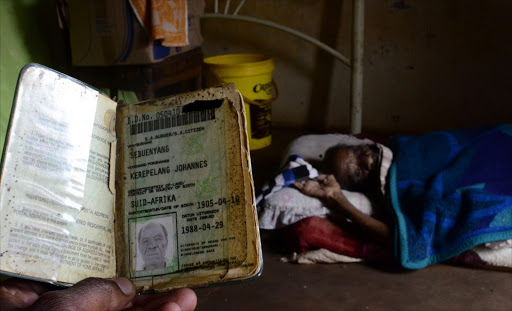 February 19,2017. 112-year-old Kerepelang Sebuenyane wishes to return to the farm he grew up on. Pic: Tiro Ramatlhatse. © Sowetan.

A sickly 112-year-old man fears that when he dies he will not be buried next to his wife who was laid to rest on a farm he used to work at.

Kerepelang Sebuenyang, from Nietverdiend outside Zeerust, in North West, said there are graves at two of his former employers' farm.

The old man's children and wife were buried at Gert Haasbroek's farm years back and the surviving family members were not sure if they were allowed to visit their loved ones' graves.

Sebuenyang's parents were one of a few families who were left behind when black people were forcefully removed from the land in the 1900s.

According to his daughter, Jane Sebuenyang, 51, her grand parents settled and worked for local farmer Haasbroek who had taken over the farm .

She said his father then moved out of the farm to work at a second farm for Haasbroek's son, Don, who had bought a farm of his own situated close to Gert's, where other relatives were buried.

However, Jane said she, her father and seven siblings were later evicted by new farm owner, Gordon Boshoff, who bought the farm from Don in August 2014.

"He [Boshoff] took out our belongings and threw them outside, he then told us to leave his farm."

Boshoff said his contract had stated that he was buying a farm that did not have people living on it. "I farm and breed buffallos, I wanted him out also to protect him from being attacked by animals," he said.

Jane said they slept on the side of the road for two days and at the time her father was 110 years.

"We did not know where to go, we walked for two days looking for a place to stay."

She said they eventually came across an old dilapidated farm house that used to be a butchery and a shop.

"We then moved into one of the rooms, until today this is what we call home," Jane said.

Jane said they never reported the eviction to anybody at the time, as they were not properly informed of their rights.

Sebuenyang lives with Jane and eight great grandchildren in the one-room farm house.

Jane said her father had 10 children, two of who have since died.

They live a few kilometres from the farm they were kicked out from. Apparently, they have to walk for half a kilometre to get water from neighbouring farms.

The room has no electricity and the roof leaks when it rains.

Sebuenyang could hardly speak when the Sowetan team visited him on Saturday. He was laying on a thin sponge and looked tired. Jane said he had been like that for three years.

She said what pained him the most was the issue of his relative's graves at the two farms where he had worked for over 90 years.

Jane said the other farm owned by Haasbroek senior was bought by government and given to Bahurutshe baga Sebogodi CPA, although they believe that it should have been given back to them.

But Bahurutshe baga Sebogodi CPA chairman Ikalafeng Sebogodi said Sebuenyang was not one of the beneficiaries of the farm since he was just a farmworker.

"He only worked here and left. Yes, his family's graves are here, and they can come and visit them any time," Sebogodi said.

He said he had heard the old man's children wanted to lodge a claim on the farm. "I am not fighting them, this is our land bought back for us by government. If they want to claim it, I will leave it in the hands of the government," he said.

The land redistribution's provincial chief director Lengale Bogatsu said they will visit the old man to see how government can help him to have a decent house.

"We first need to verify facts because it looks as if we bought the farm for the community, with Sebuenyang being one of the beneficiaries," Bogatsu said.

" Treatment of the elderly unspeakable "

Leshabana said the old man was protected by the Extension of Security Tenure Act (Esta).

He said the owner should have applied for a court order to evict the man and given him a reasonable time to leave his property.

"The court cannot ordinarily grant it. In this case, the law protects the elderly," he said.

"The owner should have contacted the municipality to see how they could get the old man an alternative home," he said.

Leshabana said the farm owner's reason for evicting the man were light. "He knew that he was farming with the buffalos, he could have erected a fence surrounding the buffalos or a fence that will protect the old man from being attacked by the buffalos."

Cosatu provincial spokesman Job Dliso said it will fight to ensure Sebuenyang's rights were protected. "What [Gordon] Boshoff did to the old man is unspeakable. We will be following this case and make sure that the old man lives in a decent place."