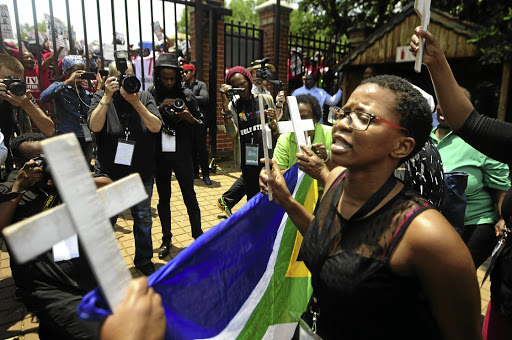 Families of psychiatric patients, who died after they were moved to illegal NGOs,sing outside the Life Esidimeni arbitration hearings in Parktown.
Image: Thulani Mbele

The funds to pay the R160.64-million arbitration award to 135 families of victims of the Life Esidimeni tragedy will come proportionately from all provincial government departments.

The Democratic Alliance’s Jack Bloom said this had been revealed by Gauteng Director-General Phindile Baleni at a meeting on Friday of the oversight committee on the premier’s office in the Gauteng Legislature.

She said that the National Treasury would not provide any funds for this‚ and that the money would be taken from the budgets of the provincial departments‚ Bloom said.

The National Health Department had been asked to assist‚ but this did not seem likely as they had already paid R6-million for the relocation of Esidimeni patients from unsuitable NGOs to proper treatment centres‚ he added.

Some people used social media on Friday to hit back at critics who said that striking employees had compromised medical care at Charlotte Maxeke ...
News
4 years ago

The deadline set by Justice Dikgang Moseneke for the payments is June 19.

“I am relieved that the money has been found to pay the financial redress for Esidimeni victims‚ but it is unfortunate that it has been diverted from funds that are needed for service delivery.

“It’s the price that has to paid for the inexcusable arrogance and negligence that lead to the deaths of 144 patients in the Esidimeni disaster‚” said Bloom‚ who is the DA’s health spokesman for the province.