R67bn for three years of FeesMustFall 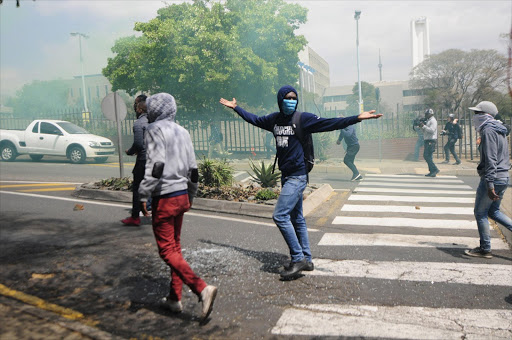 Protesting students during the fees must fall protest at the Wits University Campus in Johannesburg.
Image: Thulani Mbele.

Government has set aside R67-billion to fund the post-matric education system‚ which includes R33-billion to be allocated towards free higher education.

This is according to higher education and training minister Naledi Pandor‚ who was briefing the media on Thursday morning ahead of the tabling of her department's spending plans for this financial year in the National Assembly.

Pandor said the National Student Financial Aid scheme would in the next three years be receiving R33-billion to finance the studies of first-time university students while another R10.3-billion would fund students opting to study at technical and vocational education and training colleges.

"Over the medium-expenditure framework the combined total of additional funding for the post-school system amounts to R67-billion‚ of which R33-billion is the additional allocation of NSFAS for the introduction of the DHET bursary scheme for first-time students in the universities and R10.3-billion for TVET bursaries‚" said Pandor.

Naledi Pandor conceded the free higher education policy had not made provision for post-graduate students.
News
4 years ago

Pandor said that for the year 2018 alone‚ NSFAS has been allocated a total budget of R20.5-billion from the department's total budget of almost R90-billion‚ with the balance of the money being transferred to universities‚ TVET colleges and community and education training colleges.

Steven Zwane‚ the CEO of NSFAS‚ said following former president Jacob Zuma's surprise announcement on free tertiary education in December last year‚ they have received a hundred thousand new funding applications‚ which meant new money had to be found to meet the demand.

"We've received up to 420 000 applications in total up to this point‚ which is more than 110 000 over what we received by the end of November last year‚ which means the pronouncement had an impact of a lot more people applying‚" said Zwane.