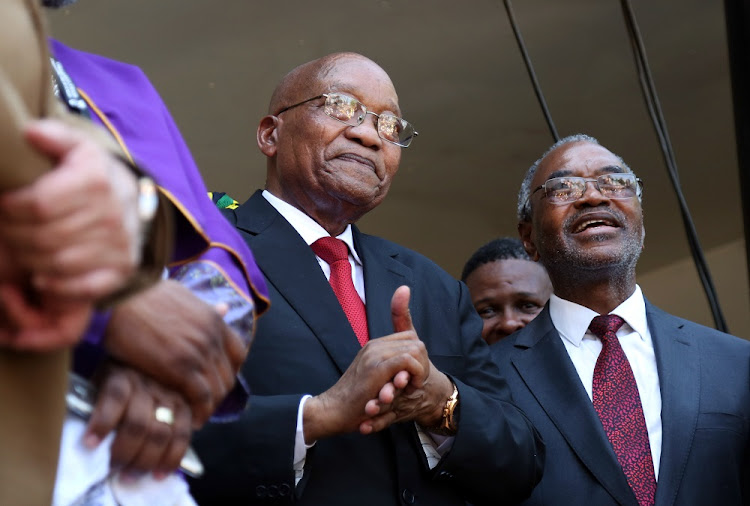 Former President Jacob Zuma walks out of Court at the Durban High Court where he made a brief appearance on 16 charges of fraud, corruption and money laundering.
Image: JACKIE CLAUSEN

It hasn’t been a very good day for former president Jacob Zuma.

Hours after Zuma appeared in the Durban High Court on corruption charges‚ lawyers for President Cyril Ramaphosa officially withdrew his office’s appeal against the State Capture judgment – and made it clear that Zuma will have to fight the estimated R10-million personal costs order made against him on his own.

The North Gauteng High Court ordered Zuma to personally foot the bill in his aborted bid to block the release of then Public Protector Thuli Madonsela’s State of Capture report‚ and his failed bid to review it. Three judges slammed his legal challenges as “ill-advised and reckless”.

Zuma’s lawyers have yet to indicate whether he will fight the costs order in his personal capacity‚ and if so‚ whether he will be entitled to state legal funding for that challenge. The state’s continued funding of Zuma’s legal fees in his corruption trial is currently being challenged by the Democratic Alliance.

Former President Jacob Zuma had his day in court on Friday but if he gets his way‚ he won't be in the dock for long.
News
3 years ago

A grim-faced Jacob Zuma appeared in the Durban High Court on Friday.
News
3 years ago

Zuma joins small club of African leaders in the dock