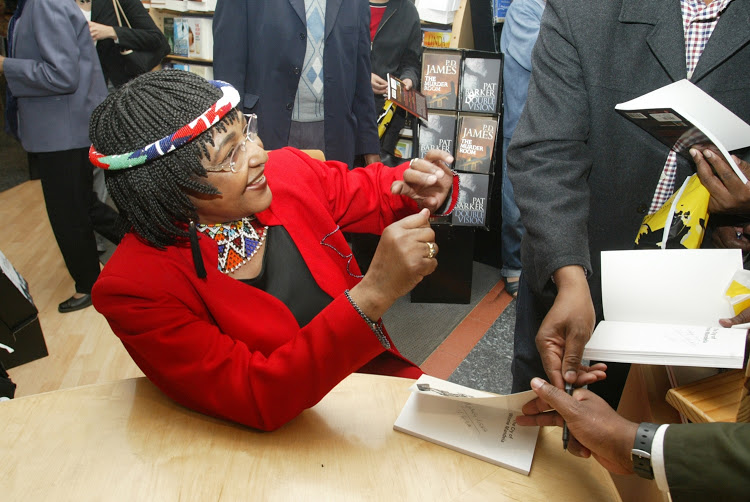 Winnie Madikizela-Mandela's beaded accessories lend a touch of tradition to the vivid red suit she wore to the launch of the book 'The Cry of Winnie Mandela' on September 17 2003.
Image: Michael Pinyana

“As much as she was ageing we did not expect her to pass on so soon‚” he told the Sowetan.

Yesterday Radebe related how a family member had called his wife Bridgette on Monday‚ saying they needed to go to the hospital as soon as possible.

They were ten minutes too late.

“We arrived at the hospital at 2.45pm and she had died at 2.35pm. We found her with her two daughters Zenani and Zindzi‚ as well as Makaziwe and other family members.

“It was by fate or God that her daughters‚ who are ambassadors‚ were in the country at the time‚ and with her when she took her last breath‚” he said.

Zenani and Zindzi were in London in 2013 when their father‚ Nelson Mandela‚ died surrounded by other family members – including their mother – at his Houghton home in Johannesburg.

Radebe said he saw how devastated Zenani and Zindzi were to lose their mother. Other family members were also in shock.

“I kissed her forehead and then did a military salute.”

The Daily Dispatch reports that due to her sudden death‚ the conferring of an honorary doctorate on Madikizela-Mandela by the Walter Sisulu University (WSU) will not happen at next month’s graduation ceremony.

She will now receive her accolade posthumously later this year.

Madikizela-Mandela was nominated and voted by the university council for an honorary degree in social science for her contribution to the liberation struggle and her work for the community.

She had been scheduled to speak to the 5‚100 graduates at the East London graduation ceremony.

The university’s management said in a short statement: “Her activism and resistance to apartheid qualified her as the mother of the nation even after Nelson Mandela decided to leave the presidential seat.”