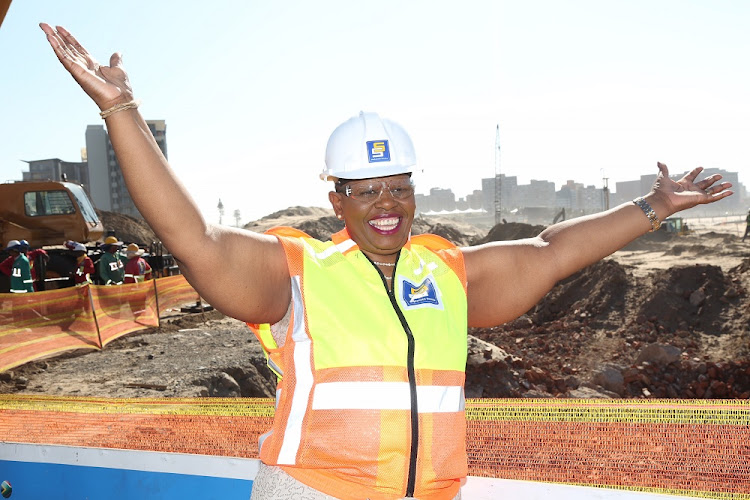 The issue of Durban’s famous Golden Mile beach being washed away by the sea will be fixed during a R30-billion facelift.

This was the assurance by eThekwini city manager Sipho Nzuza‚ who has said that the city is in talks with Transnet to help replenish several sand-starved beaches.

Dwarfed by mountains of beach sand that have been piled up near the harbour mouth and Point Waterfront area‚ Nzuza said the city was hoping to find a long-term solution to the major erosion of beach sand around Dairy Beach and North Beach – apparently due to a decade-long failure by Transnet and the city to recommission an artificial sand-pumping scheme that has helped to replenish Durban’s beaches for several decades.

Nzuza was speaking at a sod-turning ceremony on Tuesday to mark the start of a new project to extend the city’s beachfront promenade from uShaka beach southwards to the harbour entrance.

“In responding to recent reports about the sea shore being washed away‚ the City acknowledges the issue but I reassure you that we are working with our partner Transnet for a long-term solution to continue to pump sand more effectively onto the shore. Our climate scientists and engineers are also working together to find solutions to issues facing our City.”

A German tourist died when a dive charter boat capsized in the surf off-shore of the Umkomaas River mouth‚ south of Durban‚ on Friday.
News
3 years ago

He appeared to blame the recent problems on “abnormal wave conditions and severe erosion resulting from climate change”‚ though Transnet admitted to TimesLIVE last week that it has yet to commission a new sand-pumping hopper to replace the one that was demolished when the harbour mouth was widened almost 10 years ago.

The city has also confirmed that it is currently unable to use existing sand-pumping infrastructure beyond Addington beach until the new hopper is commissioned‚ and has therefore had to rely on temporary pipelines and dredgers to replenish eroded beaches along the Golden Mile.

Launching the new promenade extension along with Thewini Mayor Zandile Gumede‚ Nzuza said this project was the first phase of a much more ambitious R30-billion redevelopment of the Point Waterfront area that would “change the face of the city”.

Nzuza said the regeneration of the beachfront and promenade was a mammoth task that began in 2009.

“From walking‚ jogging‚ cycling‚ skateboarding or picnicking‚ the promenade provides a safe space for the public to refresh‚ breathe‚ exercise and relax with their families. This is what is special about Durban’s beachfront and sets it apart. I believe that our beautiful beaches and promenade is one of the determining factors that keeps people coming back year after year to our city.”

Heavy rains have claimed the lives of four people in Durban and surrounding areas.
News
3 years ago

He did not expand however‚ on the detailed reasons why Transnet and the city were taking so long to recommission an existing pumping scheme that was designed by the Council for Scientific and Industrial Research and commissioned in the early 1980s.

Nevertheless‚ Mayor Gumede said that redevelopment of the Point Waterfront over the next 15 years was expected to generate about 11‚000 temporary jobs and about 6‚750 permanent jobs on completion.

Gumede said the joint development project between the city‚ Malaysian investors UEM Sunrise and local empowerment groups would “change the face of the city”.

“Overall national public revenues that may be derived from the revised development through the various tax mechanisms could amount to an additional R1.7-billion‚” she said‚ remarking that the city was encouraged by the growing interest from the business sector to work with government in major strategic investments.

“These developments will completely change the landscape of Durban and position Durban as a global destination‚” she said.

Nzuza said he was confident that the new Point development would contribute significantly to “growing the tourism profile of Durban‚ which is one of eThekwini’s identified growth sectors”.

Coincidence and a hair-trigger saw an off-duty cop gun down three alleged hijackers in a dramatic exchange of fire in KwaMakhutha‚ south of Durban.
News
3 years ago

Durban might not be the most popular city in South Africa‚ but it offers the best quality of living.
Good Life
3 years ago

A 25-year-old woman is behind bars after she allegedly falsely claimed that a Durban businessman had indecently exposed himself to her last month.
News
3 years ago
Next Article