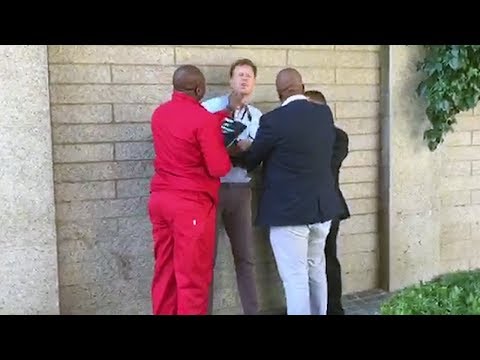 EFF deputy president Floyd Shivambu says he regrets and will write a formal apology after a confrontation with a journalist outside parliament in Cape Town on Tuesday‚ saying he regretted his “impatience“.

The assault sparked widespread condemnation and calls on the party to distance itself from its deputy president’s behaviour.

Shivambu was caught on camera assaulting Adrian de Kock‚ from Media 24‚ who was waiting with other journalists outside the building where Cape Town mayor Patricia de Lille’s disciplinary hearing is taking place.

De Kock saw Shivambu‚ asked if wanted to comment about the hearing and took pictures of the politician. Shivambu then insisted that De Kock delete the images because he had not given consent for them to be taken.

He told the publication he would lay assault charges with police.

In a statement issued by the EFF a few hours later‚ Shivambu admitted to being involved in “a scuffle” but said he did not regard it as an “assault” on De Kock nor on media freedom.

Netwerk24 multimedia journalist was ‘assaulted’ by the EFF’s Floyd Shivambu outside Parliament on Tuesday. Adrian De Kock tells us what happened. Subscribe to TimesLIVE here: https://www.youtube.com/user/TimesLive

“Today‚ the 20th of March 2018 I was engaged in a scuffle with a Photographer/Journalist in Parliament. The scuffle was a result of circumstances which included taking of photographs and persistence to speak to me whilst receiving documents from staff members in order to attend the Standing Committee on Finance (SCOF). Whilst I was in a hurry to attend the committee meeting‚ I accept that my impatience with the gentleman was inappropriate.

“The scuffle happened and was never an assault on the Journalist or media freedom. I regret the incident and believe it should have been handled differently. I take full responsibility and apologise for engaging in a scuffle with a person I discovered after the incident is a Journalist. I will write and email an official apology on the scuffle because I believe it was not supposed to happen.