Political killings in KZN are among ANC factions over 'who must eat': EFF 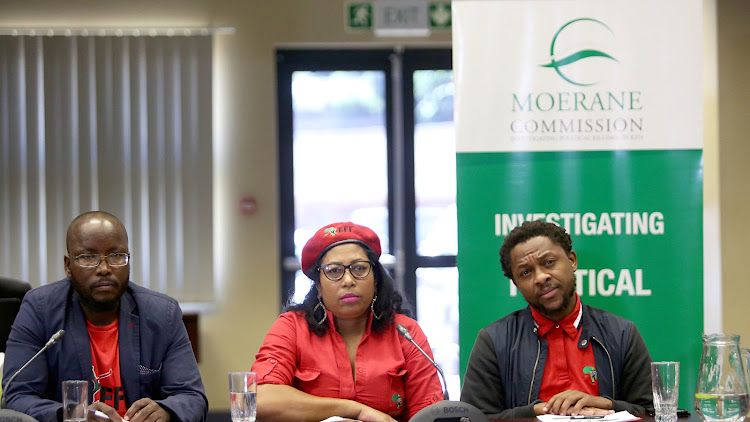 The Economic Freedom Fighters (EFF) tore into the establishment of the R15-million Moerane Commission of Inquiry into the political violence in KwaZulu-Natal‚ saying there were no political killings in the province but only intra-party killings within the ANC.

The EFF‚ led by its national spokesman and MP Mbuyiseni Ndlozi‚ MP Hlengiwe Mkhaliphi and KZN MPL Vusi Khoza‚ was testifying before the commission set up by KwaZulu-Natal Premier Willies Mchunu to investigate the underlying causes of political killings in the province.

The party did not mince its words.

It said that there were no political killings in the province‚ but rather that ANC members were killing each other for resources‚ tenders and patronage. The EFF also questioned the objective behind the establishment of the commission.

Ndlozi warned the commission not to label the ANC intra-party killings as political‚ which could absolve those involved on the basis that they were acting politically when committing murders.

Why do criminal cases get thrown out of court when there are witnesses and evidence?
News
3 years ago

Moerane Commission: Mafa‚ Msiya say they are still being threatened

Prior to their shooting in Ibisi‚ uMzimkhulu‚ councillors Sindiso Magaqa‚ Jabulile Msiya and Nontsikelelo Mafa were systematically excluded from ...
News
4 years ago

“To brand it political is almost to suspend a due police investigation that must take place. So these are not political killings and that really underlines our conceptual prioritisation in relation to what the objectives of the commission are‚” he said.

He also warned that the commission must not be used to replace proper criminal justice institutions.

“This commission must not allow itself to be used to either absolve people on the basis that they were acting politically. They were not acting politically. It must direct them to law enforcement agencies. Ultimately‚ those who have been found to have broken the law must face the full consequences.

“So don’t allow yourselves to be used to support a false narrative that in the end is going to say [that] we need a political solution to the crisis of killings in KZN. No‚ the political solution is not the route. All lives matter. Those are criminal murders that must be resolved the way criminal murders are resolved — people ending up in prison‚ not ending up in the national executive committee‚ not ending up in the provincial executive committee and political office of the state and they are absolved because they were acting politically.

“That’s the danger we have come here to caution you about and to warn you about. Don’t bury this as political and absolve the people and say a political solution is what is needed. Let crime be dealt with as crime.”

He was echoed by Mkhaliphi‚ who accused KZN Premier Mchunu of misleading the commission by tasking it with investigating political killings.

The EFF also dismissed evidence by former ANC provincial chairman and now provincial coordinator Sihle Zikalala‚ who told the commission in October that there was a “third force” which had influenced the pattern of murders in the province.

But the red berets would have none of it.

“There is no third force in South Africa. The only third force is the ANC. It is the ANC who are fighting among themselves for resources‚” said Mkhaliphi.