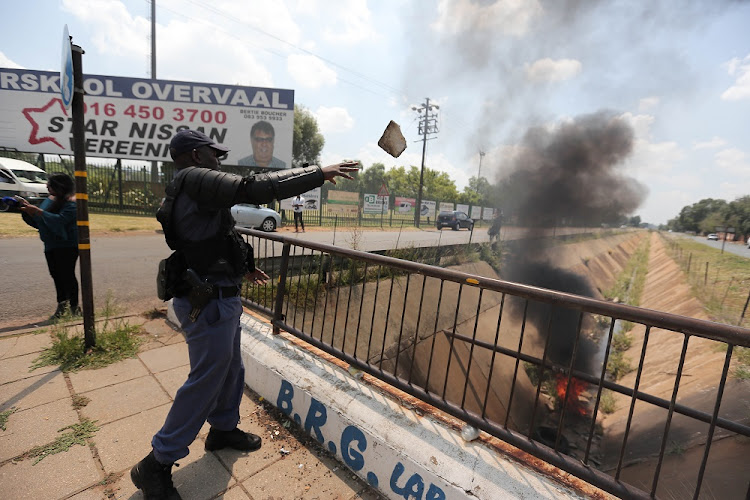 FILE PHOTO: Members of the police clear police barricades outside Hoerskool Overvaal in Vereeniging on the second day of protests at the school.
Image: Alaister Russell

A black former pupil of Hoërskool Overvaal has defended the Vereeniging school against accusations of racism.

In a Facebook post that has gone viral‚ Kamo Tjelele wrote that while he was a learner at the school‚ he was never sidelined because of his race. "I'm a proud product of Hoërskool Overvaal and as a black person‚ I graduated from that place having made friends and not enemies‚" Tjelele wrote.

"This is bilateral to teachers and learners. Never did I feel being treated differently because of the colour of my skin. So I will attest to say that there is no racism in Hoërskool Overvaal‚" he added.

According to his Facebook profile‚ Tjelele is now studying medicine in Cuba.

He wrote: "Let's allow the minority groups and some of us who belong to the majority group to exercise our constitutional right to education in the language we want."

His post came after tensions flared outside the school last week during protests over the school's language policy. A number of people were arrested after a petrol bomb was thrown at a police vehicle‚ allegedly by supporters of the Congress of South African Students (Cosas).

The row erupted after the school refused an instruction by the education department to accept 55 English-speaking pupils. The school's decision was backed by the High Court in Pretoria. The school said it had no capacity to admit the learners.

During the court battle‚ the department submitted that it had put all necessary measures in place to accommodate the 55‚ including furniture‚ study material and an English teacher.