Hawks nab three of their own for R1m armed robbery 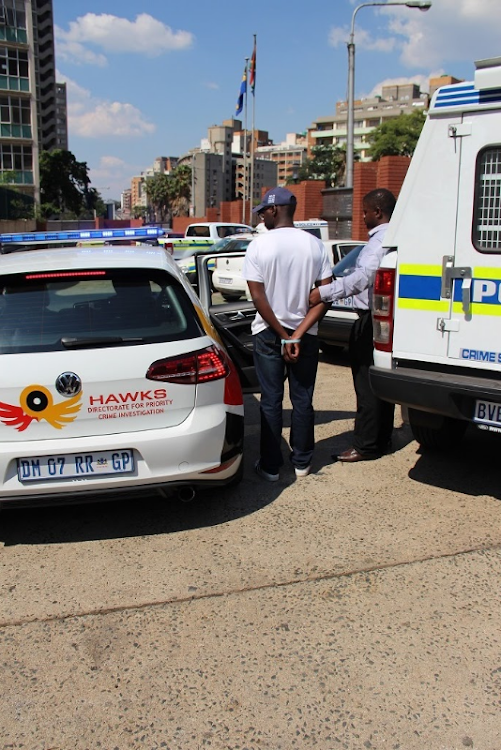 The Hawks in Gauteng have arrested two of their own members and a Hillbrow police detective for armed robbery‚ in which they netted a share of R1-million each. Image: SUPPLIED

The Hawks in Gauteng have arrested two of their own members and a Hillbrow police detective for armed robbery‚ in which they netted a share of R1-million each.

According to Hawks spokesperson Captain Ndivhuwo Mulamu‚ a fourth suspect is on the run.

The arrests took place on Tuesday after allegations emerged in September that four police officials in two cars had stopped a driver in Norwood.

“They said the man was driving recklessly. The driver then insisted on proceeding to the nearest police station‚” Mulamu said.

“He was hauled to Norwood police station‚ where a search was conducted and (police found) two boxes full of cash‚ including a receipt indicating the total amount which the victim had exchanged for his employer.”

According to Mulamu‚ the cops then took the man to the Johannesburg Specialised Commercial Crimes Court building in Eloff Street‚ where they offloaded the cash and divided it among themselves inside an office. A small share was handed to the driver.

The matter was postponed to December 27 for a formal bail application to be heard at the Johannesburg Magistrate’s Court.

Gauteng Hawks boss Major General Prince Mokotedi said he was shocked and disappointed that his own members were arrested‚ but also congratulated the arresting officers for their courage.

“Since we implemented a zero tolerance to corruption‚ we have arrested hundred and two (102) police officials in Gauteng from March 2016 to date. The Serious Corruption Investigation Unit was beefed up with eighteen members and we are now reaping the fruits of arresting corrupt individuals‚” he said.

“I want to warn unscrupulous members that we will not relax until the Hawks‚ particularly in Gauteng‚ gets rid of all the bad elements. The blue wall is greatly impeding our success to tackle organised crime. Once broken‚ our progress to bust crime syndicates will be accelerated.”

Hawks' net closes in on the Guptas

The Gupta family faces raids and seizures at its properties.
News
4 years ago

The prisoner allegedly called former city employee Mbali McClare‚ who is accused of fraud‚ and offered to make charges against her disappear.
News
4 years ago
Next Article