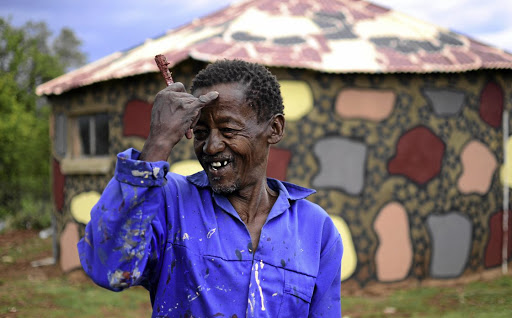 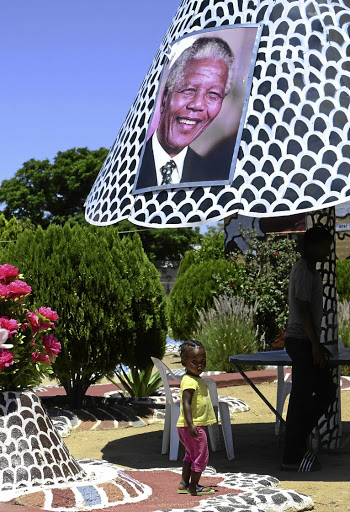 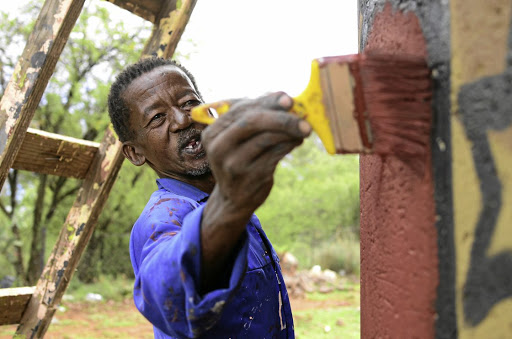 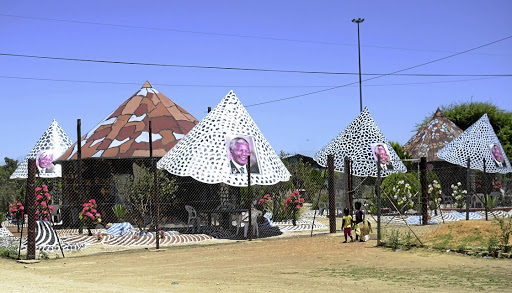 In Lonely Park village in Mahikeng in the North West stands a yard that makes many stop in their tracks - and look in wonder.

Four large portraits of Nelson Mandela engraved on the roof of iron sheet umbrella- style lapas in Mothusi Mogapi's home are a sight to behold.

Mogapi, 59, created the impressive artwork around his home using images of Mandela to pay homage to the iconic leader who is universally loved and adored.

For passing motorists and locals, Mogapi's house has become a centre of attraction. Some refer to it as a tourist site.

His paved yard is decorated with complementing paint colours and flower pots around his RDP house.

Umbrella-style roofed shades are carefully placed around the house to capture the attention of passing motorists - and tourists.

"Most people come to my house thinking that it's a guesthouse. Some take pictures and selfies," Mogapi said.

After he was involved in an accident in 2013, and also lost his job, he decided to keep himself active by adding beauty to his house. Before the accident he was employed as a motorbike delivery man.

How some are commemorating the death of Madiba

Tuesday is the fourth anniversary of the passing of former president Nelson Mandela.
News
2 years ago

"I don't like sitting around and doing nothing, so I thought to myself why don't I change how my house looks. It's dull and depressing. I wanted bring life into it," he said.

Blessed with four children. Mogapi said he enjoys every moment of his life, and will continue to give life to his RDP house.

Mogapi has no formal education. He believes that his work was "a God-given talent".

"When I am holding a paint brush and paint, nothing stops me, the ideas come naturally," he said.

On one sunny day in 2013, after Mandela's death, Mogapi said he needed to create a shade for himself. And that's how the idea of creating the colourful umbrella-style lapas was generated.

He could not just make a normal veranda or shade but decided to paint umbrellas in black and white, superimposing Mandela portraits on these.

"I wanted people to know what freedom means to us as South Africans, black and white. I adore and respect that man," he said.

"I don't want people to forget the big role he played in changing our lives. We must continue to carry [out] his legacy," he said.

Two months ago, Mogapi found his break with a job offered to create huts. Potchefstroom-based businesswoman Cleo Sello was fascinated by his handiwork.

"My attention was caught by how neat and detailed his designs and paintings were. His yard stood out from the rest and I could not ignore it," she said.

Sello said she then employed the services of Mogapi to design rondavels in the guesthouse she was busy constructing.

"His work is going to bring me business. He is gifted and does not charge a lot for the beautiful work he is doing."

Mogapi said: "I love designing and painting, I feel at peace when I do that, doing it for money will be a cherry on top."