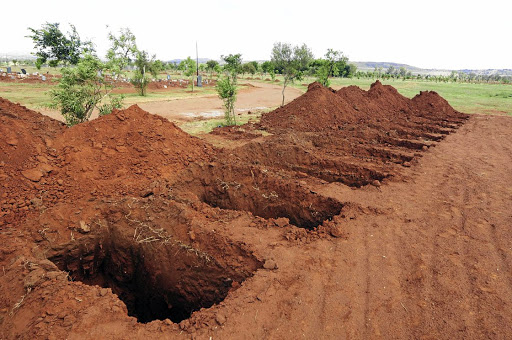 The Olifantsvlei Cemetery in Johannesburg where 42 bodies from Charlotte Maxeke Hospital that fell on the highway were meant to be given paupers' burial. Image: THULANI MBELE

The 42 corpses that brought a busy Johannesburg highway to a standstill after a trailer they were transported in lost its load were destined for mass graves.

Sowetan has established that one grave, in the paupers section of the Olifantsvlei cemetery near Eldorado Park, was ready to bury at least four adult corpses per grave.

"We bury four adults per grave"

The corpses were transported in an open trailer that broke down on the M1 South highway between Braamfontein and Newtown on Wednesday leading to a temporary closure of the highway.

Sthembiso Nkosi, one of the grave diggers at the cemetery, told Sowetan: "We bury up to 20 stillborn corpses in one grave because families do not come back to demand exhumations."

He added: "But we can burry up to four adults in one grave."

When Sowetan visited the cemetery yesterday huge heaps of sand lay next to a row of 12 graves that had been dug up in preparation for the 42 corpses that were returned to Charlotte Maxeke Johannesburg Academic Hospital in Parktown.

Ramokgopa says anyone found to have neglected their responsibility in the case of a trailer carrying 42 coffins be held accountable.
News
4 years ago

Aaron Mabuza, the owner of Soweto Funeral Services which was tasked with burying the corpses, refused to speak to Sowetan, saying: "Aningiyekeni nina bantu bamaphepha. [Leave me alone, you media people]."

Earlier Mabuza admitted to Sowetan's online sister publication TimesLive that he was at fault for using an open trailer to transport bodies.

Mabuza used a minibus and a rented trailer to transport the 42 coffins.

One of his six temporary workers told the publication that it was his first time on the job.

The workers take body bags from the hospital mortuary fridges and place them in provided coffins, Mabuza confirmed.

Corlett Letlojane, executive director at Human Rights Institute of South Africa, said mass graves were an unfortunate stark reminder of what used to happen during apartheid.

"The fact that the bodies were unidentified or unclaimed does not reduce their humanity. They still deserved to be respected even when they're dead," she said.

Sowetan has also established that Mabuza scored a R46000 deal with the provincial health department for the transportation and burial of the bodies.

According to documents, the funeral parlour was awarded a contract to conduct 43 pauper burials, at R1197 per adult corpse and R513 for a child under six years.

Mabuza was slammed for transporting the corpses in a flat-bed open trailer that is used to tow vehicles.

Thabo Banda, the chairperson of the Gauteng Funeral Practitioners Association, said yesterday that Mabuza was not their member, but lamented the price that the Gauteng health department paid for pauper burials as the main reason behind the "cutting of corners".

"The person [Mabuza] was trying to cut costs because the R1197 the department pays is very little considering the costs associated with burials," Banda said.

"He was simply trying to stretch the rand," he added.

Gauteng health MEC Gwen Ramokgopa apologised, saying she has instructed that the burial process be stalled for another seven days to give an opportunity to families who might still want to come and identify their loved ones.

"Even in instances where we cannot trace the family members of the deceased patients, the law still requires that we bury them in a dignified and respectful manner.

"I have also looked at regulations from the hospital on the transportation of bodies and I found that there are no clear specifications."

Coffins on the freeway‚ funeral company owner under fire

Aaron Mabuza‚ who was transporting the coffins‚ conceded that he may have been wrong to use the trailer to carry bodies.
News
4 years ago

Man transporting bodies found on on the M1 freeway failed to produce documentation.
News
4 years ago
Next Article