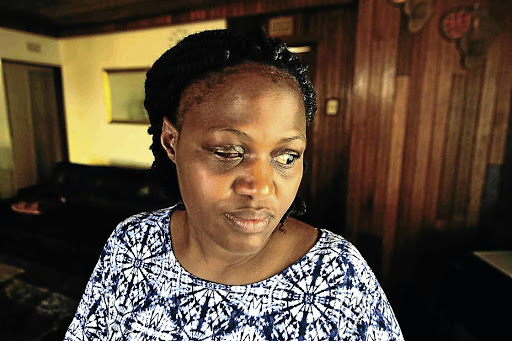 Sonto Radebe is in hiding in fear of her abusive ex-boyfriend after he allegedly stabbed her, resulting in her losing her eye. The man is out of jail on parole. / Thulani Mbele

A Soweto woman has lost her vision in one eye in the hands of her ex-boyfriend, a month after she reported him to the police for rape and assault.

Sonto Radebe, 36, said after the man, who is on parole, raped her, she opened a case and provided police with his address and photo.

However, a month later he is still at large.

Radebe said police told her to call them whenever she saw him. He then traced her, stabbed her several times on her arms, head and in the eye.

"The police failed me. I would not have lost my eye had they arrested him from the start. I am afraid of him ... how could they expect me to locate him and call them when I see him?" she asked.

Radebe's troubles began early this year when she learned that her ex-boyfriend was on parole for the murder of his child's mother. Radebe said she had to relocate twice, but the man tracked her down and assaulted her in September when she returned from work.

On October 23, Radebe was again attacked when she returned home from work. "He came out of my room as I was about to enter and started stabbing me with a knife. He stabbed me twice in both arms, in the head and in my eye. He fled after I screamed for help."

Radebe said doctors told her that there was nothing they could do to save her eye.

"I called the investigating officer and informed her about what had happened. She said I should come to the police station when I see him. She never came to me to take a statement," she said.

The mother of four, who is a nurse, said: "The police could have prevented this. I am so afraid, I see him in my sleep. I cannot go out on my own, I get frightened when someone walks behind me, and I am afraid of going back to work.

Msomi’s battered body was later discovered on Saturday in a thicket in the south Durban basin.
News
4 years ago

"I fear that I will die and leave my children [behind]."

"The suspect is still at large and police are searching for him. With regard to allegations against the police officer, we regard the allegations as very serious and there will be an internal investigation."

The Department of Correctional Services (DCS) confirmed that the man was granted parole and that he was regularly monitored by the Krugersdorp community corrections. Spokesman Ofentse Morwane said violation of conditions may result in parole being cancelled, in which case an offender may be required to serve the full sentence.

"The DCS views the allegations in a serious light. It is against this backdrop that the Krugersdorp community corrections office is currently liaising with the local South African Police Service to determine whether there is any criminal case that has been opened against him so that appropriate action can be immediately taken," he said .