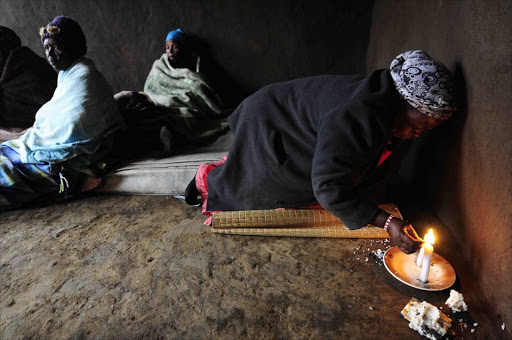 July 26, 2016. SOMBRE: A relative of Thokozani Majola lights candles as the family murns his death, Majola was shot and killed on Friday after campaigning for the IFP in Estcourt, KwaZulu-Natal. Photo Thulani Mbele © Sowetan

Thokozani Majola, 29, was shot dead while returning from an IFP door-to-door campaign in the area.

Thokozani, the brother of Mthembeni Majola, IFP Umtshezi regional chairman and proportional representation councillor, was wearing the party's T-shirt when he was shot four times in the stomach by a man wearing an ANC T-shirt while walking in the town last Friday.

Another IFP member, Siyanda Mnguni, was also shot and killed outside a tavern just hours after Thokozani's killing a street away.

His killer was also wearing an ANC T-shirt. The killings have sparked fears they could be related to next Wednesday's local government elections, and that they could lead to retaliatory attacks and more violence.

At least 14 people, including ANC, IFP and National Freedom Party members, have been killed in the run-up to the elections.

"After those two incidents people are now afraid of campaigning. The situation was very peaceful prior to the two incidents," said Thokozani.

He said they were still waiting for the ANC leadership to assist with the funds to help the two families, who are destitute, bury their loved ones.

He said ANC leaders should attend the funerals of Thokozani and Mnguni to send a message to voters that the two parties were not at war with each other.

Thokozani's family in a rural area outside Estcourt said they lived in fear as they did not know the motive behind the attacks.

"They were wearing ANC T-shirts and shot at people wearing IFP T-shirts. At this stage we can't conclude whether it's politically motivated or not," said Thokozani.

IFP national chairman Blessed Gwala said: "We call on the Independent Electoral Commission (IEC) to ensure that there are consequences for those who don't adhere to the electoral code of conduct.

When acts of violence or intimidation take place, it's a direct challenge to the IEC and police as perpetrators of such violence are testing the resolve of the IEC to ensure that there are free and fair elections.

"Unless we speak out against these senseless killings, nothing will change and innocent people will continue to die."

ANC provincial spokesman Mdumiseni Ntuli said they had not yet confirmed if the perpetrators were indeed linked to the party.

Ntuli said they would continue to work with the IFP in the provincial government's multi-party forum to promote good working relations between political parties.

Police spokesman Major Thulani Zwane said one person was arrested in connection with Mnguni's murder while the suspect in Thokozani's death is still at large.