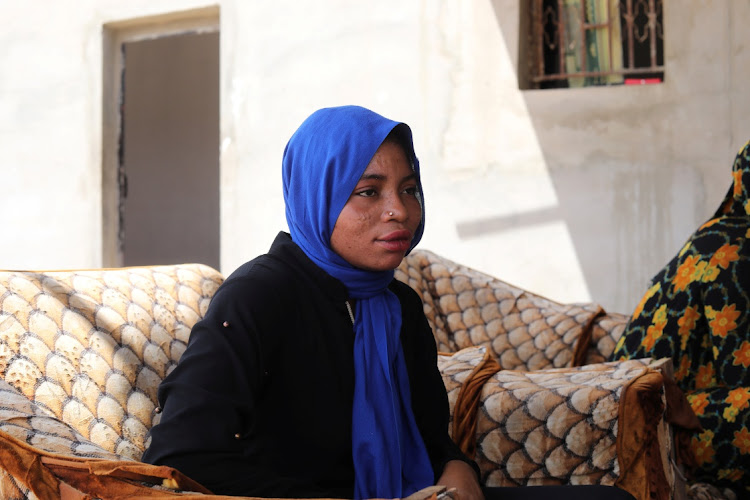 Halima, a Nigerian migrant, is pictured at a shelter called 'Safe House' in Beni Walid, Libya on August 18, 2021.
Image: REUTERS/Islam Alatrash NO

Halima William crossed the desert from Nigeria to Libya hoping to reach Europe for a better life, but was forced into prostitution until she was able to escape and find refuge in a rare safe house.

The story of William, 23, and her husband Mark, 27, who also faced detention and abuse, show the risks facing ever growing numbers of migrants seeking what they hope will be safety and prosperity in the West.

Though they were reunited by chance at the safe house in the town of Bani Walid, where they have been able to find a semblance of security for now, they still hope to reach Italy and escape a country mired in a decade of chaos and violence.

It was Mark who left Nigeria first, travelling overland and smuggled into Libya across its desert border in a car making for Tripoli in 2016. Upon arrival in Bani Walid, 180 km (110 miles) south of the capital, he was detained by armed men.

Much of Libya has been dominated since the 2011 NATO-backed rising against Muammar Gaddafi by myriad armed groups who battle for control of territory and economic assets - including the illegal traffic in migrants.

The U.N. migration agency IOM says there are more than 500,000 registered migrants in Libya. This year, the number of people trying to cross through Africa to Europe has grown.

Mark was held for seven months by men who demanded money to release him and he eventually paid up. He found work in Bani Walid as a builder, planning with Halima by phone to unite and travel onwards.

She came to Libya in 2018 by the same route as Mark. When she reached Tripoli, she was sold into prostitution in Bani Walid by a friend, she said, and without a Libyan phone could not contact Mark.

After four months she managed to escape and reached the safe house, which is supported by the United Nations and the medical charity MSF - finding her husband was there already.

"I hug him and kiss him and start crying. He was crying too," she said of that first moment of reunification.

"I was surprised because I didn't know I was going to meet him again."

The safe house's founder, Al-Hussein Bin Gharsa, said he wanted to show the true, kindly nature of Libyans and of the citizens of Bani Walid.

The shelter, which provides food and complete medical care, and is funded by donations from the townspeople and local businesses, has been running since 2015 and currently hosts 12 migrants, most of whom are from sub-Saharan Africa.

"This is a city of generosity and hospitality," Bin Gharsa said.

At least 43 migrants drowned in a shipwreck off Tunisia as they tried to cross the Mediterranean from Libya to Italy, while another 84 were rescued, ...
News
10 months ago

At least 23 migrants from Africa drowned in a shipwreck off Tunisia as they tried to cross the Mediterranean from Libya to Italy, and 70 were ...
News
11 months ago

At least 17 migrants drown in shipwreck off Tunis

At least 17 African migrants drowned in a shipwreck off Tunisia as they tried to cross the Mediterranean from Libya to Italy, the Tunisian Red ...
News
1 year ago
Next Article