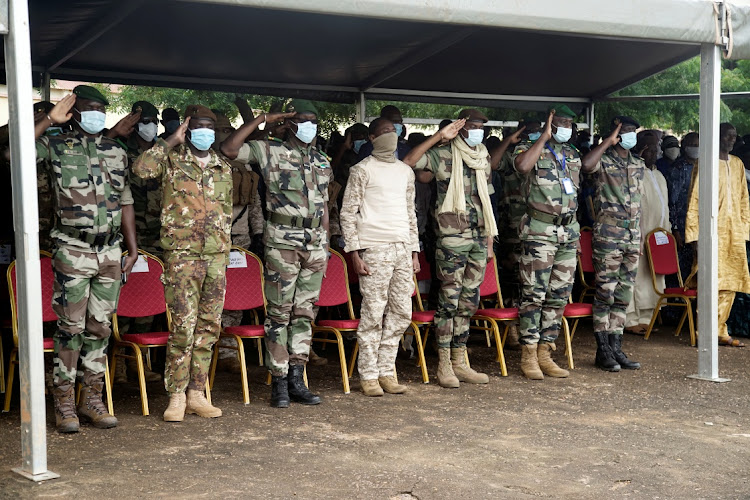 FILE IMAGE: Junta leaders of the National Committee for the Salvation of the People (CNSP) which overthrew Mali's President Ibrahim Boubacar Keita salute during an honour ceremony for the ten Malian soldiers that the army said were killed in militant attacks in Gueri town, at the army headquarters in Kati, Mali September 6, 2020.
Image: REUTERS/Matthieu Rosier

Constitutional experts raised the prospect of two years of military-led rule in Mali following last month's coup at talks on Friday, defying calls by the West African economic bloc ECOWAS for elections within a year.

The Aug. 18 coup that toppled Ibrahim Boubacar Keita led to swift economic sanctions by ECOWAS, which fears it could set a dangerous precedent in the region and undermine the fight against Islamist militants across West Africa's Sahel region.

The experts' recommendations emerged on the second day of talks on a transition. ECOWAS, which stands for the Economic Community of West African States, has given the ruling junta until Tuesday to name a transitional president and prime minister.

In an eight-page "charter of the transition" the experts wrote that a transitional period of 24 months was needed "in light of the complexity, the gravity and the structural depth of the Malian crisis".

Mali's ousted President Ibrahim Boubacar Keita was hospitalised in the capital Bamako on Tuesday evening for an overdue check-up with his doctor, a ...
News
1 year ago

The recommendations have not yet been formally approved by the representatives of the CNSP, political leaders and civil society groups taking part in the talks, which are due to end on Saturday.

Some Malian political leaders have insisted, along with ECOWAS, that the interim president is a civilian, but the document said the person can be a soldier or civilian.

The candidate must be between the ages of 35 and 75 and would not be eligible to stand for election at the end of the transition, it said.

Ghana will host a mini-summit of ECOWAS leaders next Tuesday, a spokeswoman for Ghana's foreign ministry said. It has not said what it will do if its demands are not met by then.