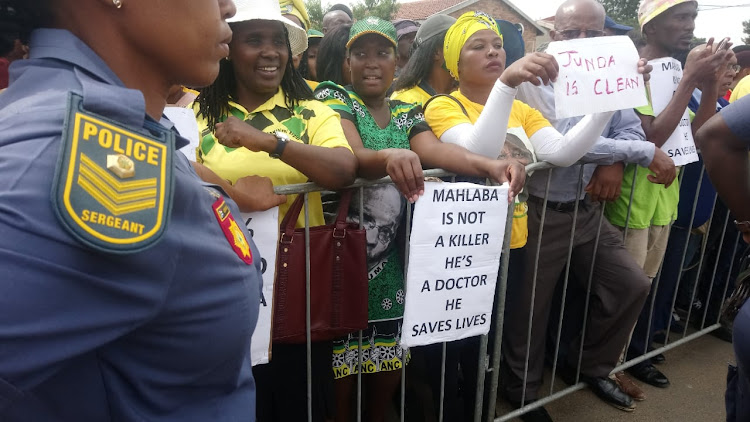 Supporters of Newcastle mayor Ntuthuko Mahlaba gathered outside the Madedeni courthouse on Monday when he made a bid for bail.
Image: Orrin Singh

Newcastle mayor Ntuthuko Mahlaba has been granted bail of R20,000, following a brief bail application at the Madedeni Magistrate's Court on Monday.

He was arrested more than a week ago in connection with the 2017 murder of former ANC Youth League official Wandile Ngobeni.

Mahlaba, a medical doctor who was sworn in as mayor in February, was remanded in custody after his first appearance last week Monday.

BREAKING: Newcastle Local municipality mayor Dr. Nthuthuko Mahlaba has been granted bail of R20 000 at the Madadeni magistrates court, north of Durban. The case has been postponed to 30 April for further investigation @TimesLIVE

He remained in prison until his bail bid on Monday.

His supporters gathered outside the courthouse calling for his immediate release and brandishing placards saying "Mahlaba fights corruption".

The ANC in KZN has decided that its members who have been charged with serious crimes, including Harry Gwala district municipality mayor Mluleki ...
News
3 years ago

The head of the National Prosecuting Authority in KwaZulu-Natal said she was satisfied with the decision to withdraw murder and attempted murder ...
News
3 years ago
Next Article