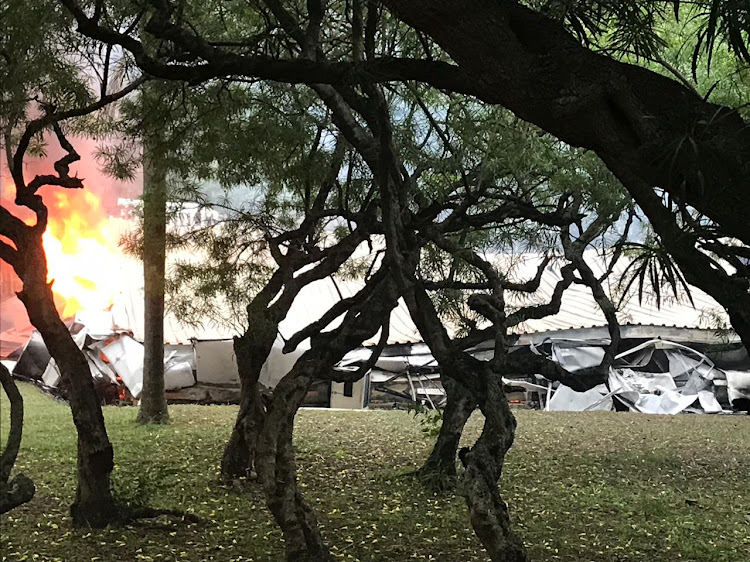 An investigation is under way after arsonists set the KZN Department of Cooperative Governance and Traditional Affairs office (Cogta) in Mayville, Durban, alight on Thursday morning. The attack comes after days of protests in the area over land.
Image: Supplied

Cogta said its Mayville office, which housed sections of the department’s administration, was believed to have been a random target.

"This morning the offices, which are situated near Cato Crest, were attacked again and perpetrators have burned the offices to the ground. Reasons for this barbaric act are unknown, but are believed to be related to a public protest by informal settlement dwellers and land invaders due to government's crackdown on lawlessness," said Cogta spokesman Lennox Mabaso.

The office had also been attacked two days ago.

"These offices were previously attacked on Tuesday by protesters who threw what seemed to be a petrol bomb, which caused some damage.

Evidence gathered at Duvha Combined School in Witbank - which was set alight in the early hours of Tuesday morning - pointed to arson, said ...
News
2 years ago

"This was during a protest where vehicles travelling on the Jan Smuts Highway and Vusi Mzimele (Bellair) Road intersection were attacked by land invaders who threw stones at passing vehicles and blocked roads," Mabaso said.

The same office was robbed last November, when a group of gunmen removed television sets and computers from the building.

The robbers also hijacked a Cogta employee's vehicle. It  was later recovered in Newlands.

“We strongly condemn this heinous act which has undermined the foundation of our democracy, which is rule of law. This is a direct sabotage of the state infrastructure which ends up having dire consequences on innocent residents who rely on government services such as the ones provided by our department.

"We are calling upon law-enforcement agencies to leave no stone unturned in their pursuit of the perpetrators of this dastardly deed,” she said.

Dube-Ncube called on surrounding communities to come forward with any information that could lead to arrests.