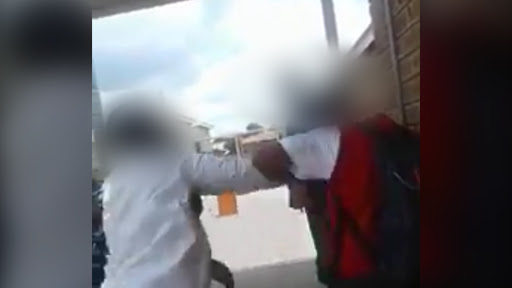 Schoolmates during a brawl at the Duvha Combined School. The school has gone up in flames following a suspected arson attack.
Image: Supplied

Part of the Duvha Combined School in Witbank has gone up in smoke following a suspected arson attack‚ the Mpumalanga education department said on Tuesday.

Spokesperson Jasper Zwane said the administration block of the school was torched on Monday night. "The storeroom caught fire‚ which affected the office of the principal and a number of other offices‚" he said.

"A team of officials from the infrastructure directorate has already been sent to the school to conduct an assessment of the damage and to advise the department on the course of action that must be undertaken."

A case of arson had been opened. The department has called on anyone with information to come forward.

Shot Mmametlhake Secondary School window breaker 'was not himself'

The sister of a man who broke the windows of his former school and attacked police officers was concerned about his sudden change of behaviour.
News
2 years ago

Zwane was confident that the fire would not disrupt ongoing exams.

The school was already in the spotlight after a video of a fight - which took place on January 30 - went viral.

Earlier on Tuesday the department announced the expulsion of two grade 9 learners who were recorded beating a grade 8 pupil.

"Because these two learners fall within the compulsory attendance age‚ the circuit manager has been tasked to enroll them in another school and to closely monitor their conduct‚" said Zwane.

A third pupil who was also part of the assault was given two weeks' suspension and told not to conduct himself in a similar manner in the future.

Zwane said the department believes this will "send a clear message that bullying will not be tolerated in schools".

The assault of the pupil was caught on video and shared on social media by numerous people‚ including the aunt of the victim‚ who said she had wanted to highlight the terror brought on by bullying.

In the 24-second video‚ a bigger boy confronts the victim and keeps asking him (in isiZulu) what he is saying while smacking him on the head. The younger boy‚ with his backpack still strapped to his back‚ does not reply. Instead he covers his head to protect himself from the series of blows. Another boy then joins in the pummelling. He smacks and punches the victim before a third attacker joins in‚ also slapping the victim.

One boy comes and pulls the second attacker away.

All the while‚ the person believed to be taking the video is chuckling in the background. It is unclear how the altercation ended.

The police have shot and injured a man who had made an unauthorised entry at a Mpumalanga school and vandalised the institution's property. The ...
News
2 years ago

The victim’s mother told SowetanLIVE last month that the incident happened on January 30. "The big boy seen in the video is a Grade 9 learner and he is a prefect at the school. According to my son‚ some pupils had been stoning the security guard's houses near the school and the prefect reprimanded those who were doing this‚" she said.

"My son joined in and told those throwing stones to stop. Apparently this boy [the prefect] was angered‚ feeling my son was taking his job."

On the day of the attack‚ she said‚ she had taken the day off from work. When her son returned she offered him a pie‚ but he said he was not feeling well and would just head to bed. Without looking at his mother‚ he accepted painkillers and went to his room.

For several days after that‚ she had to force her son to hurry to get ready for school‚ noticing that he was reluctant to do so every morning.

The mother only learnt of the video on February 6‚ after the school principal phoned her.