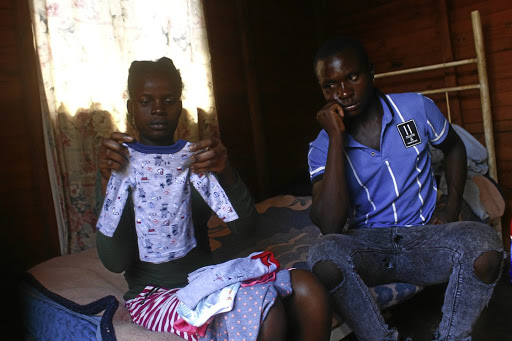 Eksodia Ubisse and Jerry Mabaso are hurting about the abduction of their three-week-old baby by strangers who met the young mother outside Tembisa Hospital. / KABELO MOKOENA

Police in Tembisa have launched a manhunt for two women and a man who allegedly abducted a three-week-old baby from her mother.

Baby Zita was abducted together with her mother Eksodia Ubisse who was later dumped in an open veld in Johannesburg a week ago. The child has yet to be found.

Ubisse said she took her daughter to Tembisa Hospital where she was being treated for a wound in her left leg.

She said the wound was caused by a drip that was wrongly inserted after giving birth. The first-time mom had delivered the child at home by herself.

Ubisse said she was buying food outside the hospital gate when she was approached by a woman who removed the blanket that she used to cover the child's face.

"She asked me the sex of the child and I told her that it was a girl. I did not mind because people love small babies. She then walked away and I went my way," she said.

Ubisse said she then waited for a taxi next to the road when the same woman pulled up next to her driving a white car.

"She said she would drop me off next to my place. I got in the back seat where there was a man sitting," she said.

A Port Elizabeth father and his seven-month-old daughter were shot and killed in their bed in a suspected hit.
News
3 years ago

Ubisse said the car stopped next to a shop where another woman in the car stepped out . When the woman returned from the shop, she went to sit in the back seat as well.

"When we arrived in our area I took out R10 and told them that I was getting off but the woman continued to drive.

"She said she was going to drop off the man and she would come back. I started to cry because I did not know the area well," she said.

Ubisse said the woman at the back forced her to drink something that made her dizzy. She said a few moments later they stopped at the side of the road and changed cars.

"There was a male driver in that car. The woman who drove the previous car grabbed my baby from me because I was weak."

Ubisse said the car stopped in an open veld where she was instructed to get out. Her bag was taken before the car sped off with the infant.

"I tried to chase after the car crying and screaming but it was too fast. I then asked for help from [someone] who took me to the police station.

"I can't eat or sleep. I know that she cries all the time because my breasts are always sore. I want my baby."

Ubisse's partner Jerry Mabaso, 26, added: "I want my child back. We have been praying together every night since that day. Her mother only eats a spoonful or two."