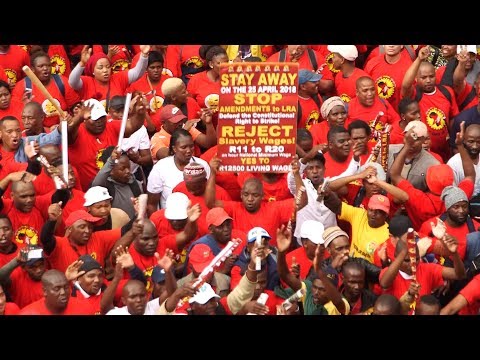 ‘R20 an hour is an insult’: Saftu strike hits South Africa The South African Federation of Trade Unions hit the streets as part of a nationwide strike on Wednesday April 25 2018 in an effort to raise concerns over a proposed R20 per hour minimum wage.

President Cyril Ramaphosa on Tuesday acknowledged that the proposed national minimum wage of R20 per hour or R3‚000 monthly was not a normal living wage.

Speaking at Cosatu’s May Day Rally in Port Elizabeth‚ Ramphosa said: “As we negotiated this‚ we knew that this is not a living wage‚” Ramaphosa said‚ clarifying that this amount was discussed and agreed on by workers’ unions‚ businesses‚ government officials and members of civil society.

“A living wage is much higher than this R20 an hour‚ but we said we need to form a foundation so that we can keep going up because the challenge we faced was that‚ if we suddenly said workers must earn R15‚000‚ a lot of workers would lose their jobs; a lot of companies close.”

Ramaphosa said the amount was a foundation for higher wages.

“The struggle for a living wage must continue but we must start somewhere‚” he said.

He said before Cosatu made its move‚ the ANC was seemingly “sleeping” on the issue and was suddenly woken up by the trade union.

Around 6.6 million workers stand to benefit from the wage increase.

“Out of the 16 million (workers in South Africa)‚ 6.6 million earn less than R20 an hour or less than R3‚000 a month and this is the case in the number of industries‚ in the farms and even in our homes – the domestic workers we have in our houses‚” he said.

The year-old South African Federation of Trade Unions (Saftu) was among the parties which were critical of the proposed minimum wage.

They staged a nationwide strike on Wednesday in protest against legislation to implement the minimum wage.

Saftu general secretary Zwelinzima Vavi said that by passing legislation setting the minimum wage at such a low level‚ the government was entrenching poverty.