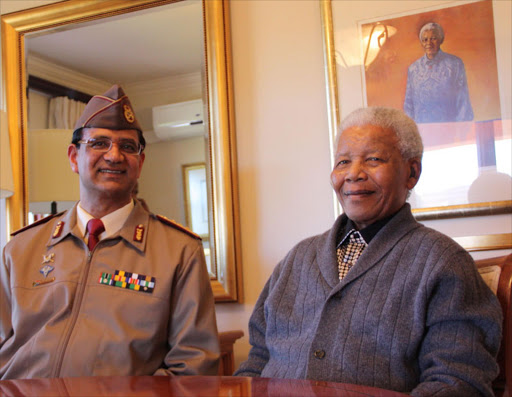 The few early birds who managed to get their hands on the controversial Nelson Mandela book before it was taken off the shelves could possibly have laid their hands on a gem.

One man who bought the book for less than R300 said he had received several offers from people willing to take it off his hands.

While several South Africans have made offers for the book‚ Kalembo said much of the interest came from people outside the borders of South Africa.

“The interest is from internationals since most people have caught wind of the story‚” he said.

The book‚ titled Nelson Mandela’s Last Years’ was penned by Dr Dr Vejay Ramlakan and has received a massive backlash from the Mandela family‚ including his widow‚ Graca Machel.

It contains never-before-published information on Madiba’s various health conditions‚ including that doctors were worried he “might have died” when he stopped breathing on a chilly night in June‚ seven months before his December 2013 death.

Ramlakan also wrote that it was Winnie Madikizela-Mandela‚ and not Machel‚ who was at Mandela’s bedside when he died and that internal family politics negatively affected Mandela’s health in his final few months.

While the book had been scheduled to hit the shelves on Monday‚ Kalembo said he bought the book in Sandton City on Saturday morning.

“I had intended on getting it on the day of launch but had other plans [so I] bought it on Saturday morning at Exclusive Books. There was no mad rush to get the book. I was even contemplating if it was worth the hype‚” he said.

Kalembo said purchasing the book was simply about feeding his curiosity.

“I was curious to read the untold truth about Mandela’s last years‚ not so much his medical conditions‚ but more how everyone was exploiting his frail status and how his medical team was coping with keeping him in a healthy state for some of these public displays‚” Kalembo said.

Two days into the book‚ he was yet to find the explosive parts.

“I have read sections of the book and [there is] nothing we didn’t already know but for the most part a lot of things have been given context. i.e. Mandela’s ambulance getting stuck on the highway‚” he said.

“By the way‚ the whole drama of Winnie [his former wife] being the one at Mandela’s side during his final breath is nothing new (sic). She did an exclusive interview with ITV news‚ giving account of what happened‚” he said.

The foundation said it was working on a list of all the inaccuracies it noted in the book which has since been recalled.