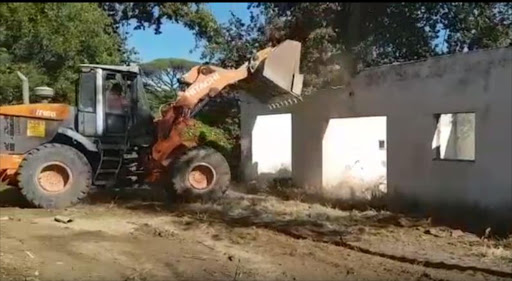 A 107-year-old Herbert Baker mansion was demolished on Wednesday after becoming the first “problem building” seized by the City of Cape Town.

For neighbours in Somerset West‚ the council’s move marks the end of eight years of disturbances and crime as the mansion was allowed to crumble.

Ferdinand Nel‚ the registered owner of the riverside house on 4‚818m² in Bellona Crescent‚ denied responsibility for the property.

His lawyer‚ Hannes Pretorius‚ said the decline of the property stemmed from a dispute with one of Nel’s former business partners.

When he moved to Johannesburg from Gordon’s Bay‚ he left the house in the care of the partner. Several years later‚ when he was informed that there were problems with the tenants‚ he asked Pretorius to investigate.

“I had been there many times for meetings and it was an amazing house‚ really amazing‚” said the lawyer. “But when I went there after Mr Nel called me I was shocked by what I found — it was already three-quarters gone.”

Pretorius said the house‚ over which a bond was registered‚ had been put up as surety for a loan to a company that ran into financial difficulties.

“We lost the liquidation case in the High Court in Cape Town and went as far as seeking leave to appeal to the Constitutional Court‚ but we were denied permission to do so‚” he said.

In the council valuation carried out in 2015‚ the property was said to be worth R5.36-million.