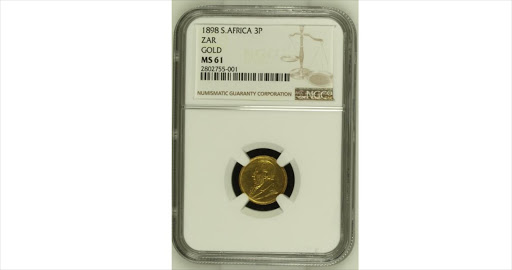 Bids opened at just one rand‚ but a Sammy Marks golden tickey has reached R399‚000 — and counting‚ despite never actually being legal tender.

This rare South African coin is currently on auction on bidorbuy.co.za. Bidding started on February 6‚ and is set to close on February 26.

The little coin depicts the portrait of president Paul Kruger on the reverse and a laurel wreath surrounding the number three on the obverse.

Never legal tender‚ Sammy Marks golden tickey is regarded as part of the ZAR series because it was struck from official dies.

In 1898‚ he said‚ President Paul Kruger allowed the mining magnate Sammy Marks to use the National Mint for one day as a gesture of appreciation for services to the government.

Marks had 215 tickeys struck in 22 carat gold that came from his mines.

He gave the coins as gifts to friends and family.

Today‚ these rare pieces are worth a fortune‚ said Berry. Only 32 out of the original 215 are known to have been graded.

The abbreviation “MS” stands for mint state. The seller specifies in the listing that the coin is “full lustre” and “UNC”; in other words‚ that it is uncirculated and has no trace of wear.

“In the past‚ we’ve had auctions where rare ZAR coins attained the prices close to half a million rands‚” said Berry. “We impatiently wait to see whether this Sammy Marks golden tickey will beat previous records.”