Students will remain angry until they have free education: Malema 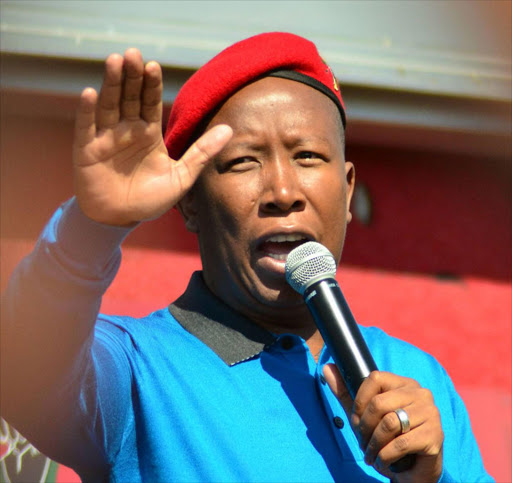 EFF leader Julius Malema says students will remain angry until free education is handed to them.

Malema who was reacting to Finance Minister Pravin Gordhan’s mid-term budget speech on Wednesday‚ said the students’ anger was justified.

“Their anger is justifiable‚ they were promised free education in 1994 and the ANC owes it to this generation to deliver free education.”

He denied that his party was behind these protests.

“We must stop this thing of shifting the goal post and wanting to accuse other people for our own failures.

“The ANC must take full responsibility and continue to look for money and call for national dialogue where concrete proposals will be made.”

“It is not going to go away (protest) it will happen year in and year out until free education is delivered.

“We are part of the protest on free education because we believe that an equal society can be created through offering free decolonised quality education.”

Malema said Gordhan was being “dealt” with and the EFF would be part of those who wanted to defend him when he appeared in court.

“We came to say to the minister he is not alone. We can see political persecution‚ we know how those who abuse state institutions operate and therefore the whole world must know that we do not have any doubt that our minister did not do anything wrong.”

Malema said the EFF’s support for Gordhan did not mean the party agreed with his budget speech.

“But we still disagree with him‚ we do not agree with his budget‚ we are not happy that he did not declare free education.

“But his limitation is that he is serving a wrong organisation. We do not agree with the nuclear deal being shifted to Eskom‚ because he has just put that deal at the door of the Guptas. But that does not mean when there is an injustice we must keep quite‚” he said.

“What a difficult exercise for Minister Gordhan. Where there is no economic growth‚ where prospect of revenue is declining‚ you must make sure that you service the nation properly and I think he has done relatively well under the circumstances‚” he said.

Mantashe said he was particularly impressed with the bigger amount that Gordhan had channelled into higher education.

“That is an investment in the future. The fact that there is money put must assure the students that this commitment is not just lip service.

Students will cry for fees must fall‚ but the minister of finance is actually being systematic in meeting the demands of students‚ but the focus is on the poor‚” he said.

DA leader Mmusi Maimane said South Africans had a government that had failed to be responsive to the people.

“There is almost a level that people feel they must do more to get attention from the government‚” he said.

Maimane said while people had a right to protest‚ it must not be violent.

The chanting students‚ who are demanding free education‚ had earlier handed a memorandum to Gordhan as he was making his way inside Parliament.

This happened just as Gordhan announced an additional R9-billion for post school education which increases the budget allocation by 18% from the previous year.