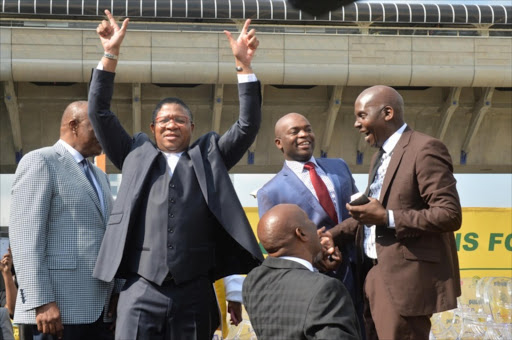 Chiefs have never won the continent's biggest club competition and mischievous fans have spent the past few days pointing this out on social media through hilarious memes after Mamelodi Sundowns won the tough tournament on Sunday.

Motaung was one of the many dignitaries who were at OR Tambo International Airport to welcome new African champions and a playful Mbalula couldn't resist taking a dig at him.

"I want to say today because Bobby Motaung is here representing Kaizer Chiefs‚ that team that loses every weekend.............." he said to howls of laughter.

"But I am happy that Bobby is here because all of us all of us today are Kaizer Chiefs.

"No‚ no‚ no‚ no we are Mamelodi Sundowns. I was just messing with him."

Chiefs have been accused of having an indifferent attitude towards Caf competitions and often gave the impression they would be happier jumping off the top of Carlton Centre than playing on the continent.

Pirates are the only other South African team to have won the Champions League - they won it in 1995 - and the Bucs have never shied away from continental duties.

"I want to make him (Motaung) feel how nice it is to have a star (the star that is placed above a club or a national team badge after winning a continental or world title)‚" Mbalula said.

"I do not want him to go and get a star from the ZCC (Zion Christian Church)."

Chiefs are not the only teams in the PSL to have an indifferent attitude towards Caf competitions and even Wits and Ajax have been guilty of having a similar position. - TMG Digital