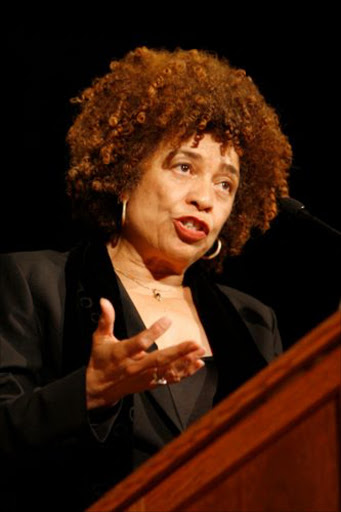 When senior University of SA official Dr Somadoda Fikeni called Zulaikha onto the podium after the lecture to hand over an artist's portrait of Davis to the academic, the teenager stood up and walked a few steps from the public gallery.

Halfway down the staircase, Zulaikha turned around and gestured to her schoolmates to join her on stage.

Davis later said she was very impressed by Zulaikha's actions.

"She came with her comrades, she refused to come alone," Davis said.

Zulaikha and her schoolmates were Unisa's special guests at the 17th annual lecture in honour of the late Black Consciousness activist who died 39 years ago today, according to Fikeni, Makhanya's adviser.

Davis, a distinguished professor emeritus at the University of California, Santa Cruz's feminist studies department, told the packed ZK Matthews Hall at Unisa's Muckleneuk campus that she could not have imagined that two decades after the end of apartheid, the world would be confronted with militaristic responses to people's protests.

The former Black Panthers activist, who became only the third woman to be placed on the Federal Bureau of Investigation's 10 most wanted list on trumped-up charges that carried the death sentence in the 1970s, advised the current generation of activists to be grateful for the past but not to receive legacies uncritically.

Davis, 72, added that young activists stood on the old generation's shoulders, and she joked that veterans take themselves too seriously.

According to Davis, Black Consciousness was a political consciousness reality, and at the core of Biko's ideology was the struggle for freedom.

Described as a radical feminist, Davis said her feminism was not simplistically driven by gender.

After the lecture Davis, who said she was "a communist with a small c", was whisked away in a modest Unisa Hyundai with Amponsah, while her host Makhanya was chauffeured in a huge Mercedes Benz sedan.