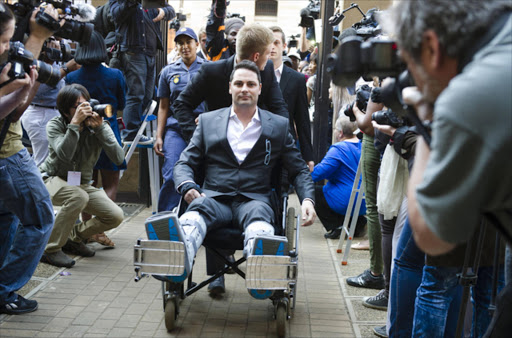 Carl Pistorius arrives at the Pretoria High Court on September 11, 2014, in Pretoria, South Africa. Oscar Pistorius, stands accused of the murder of his girlfriend, Reeva Steenkamp, on February 14, 2013. This is Pistorius' official trial, the result of which will determine the paralympian athlete's fate. Judge Masipa has began delivering her verdict. Gallo Images

The decision was made earlier this month after Pistorius failed to submit a statement, Colonel Ronel Otto said.

"The investigating officer obtained statements from the other parties and witnesses. Despite several efforts [by the officer], Mr Pistorius did not submit his statement."

The docket was sent to court where a prosecutor instructed that charges be laid against Pistorius, Otto said.

The matter would be heard in the Modimolle Magistrate's Court in February. Otto could not immediately provide the date.

The accident took place outside Modimolle, when Pistorius's car collided head-on with another in August last year.

He had to be freed from the wreckage with the Jaws-of-Life before he and the other driver were taken to hospital, both with serious injuries. Two passengers in his car were unhurt.

In May last year, Pistorius was acquitted on a culpable homicide charge following an accident in 2008 in which a motorcyclist died.