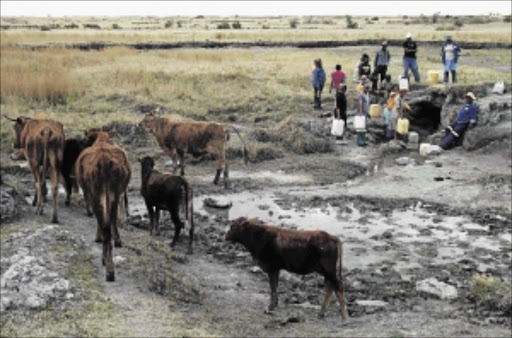 HEALTH HAZARD: Residents of Bodibe near Lichtenburg in North West share a fountain with their animals Photo: Boitumelo Tshehle

RESIDENTS of Bodibe village near Lichtenburg in North West are forced to drink water from a fountain used by sangomas and prophets.

Throughout the day, a group of villagers walk about 1km to the fountain to fetch water, the same used by their livestock.

Villagers said they had to remove candles, dead chickens and snuff containers used during rituals to get the water.

They said they had no option but to risk their lives because Ditsobotla local municipality was not doing anything to ensure they have water.

Resident Phillip Bontleng said sometimes they see people's blood but they just sweep it away to fetch water.

"Sangomas bring people here and perform rituals, then we come and clean the remains of the ceremony so we can get water," he said.

Keabetswe Motsumi said the municipality told them to stop fetching water from the fountain because they (the municipality) could not prove if it was clean enough.

"This is a fountain and water keeps on flowing. It is clean. I use it to clean, take a bath and also cook with it," she said.

Motsumi said she was aware that sangomas throw things inside the fountain but believedthe water cleaned itself.

"It's natural. Even if you pee in this water now, I will drink it. So far we have not experienced any sickness. I can drink at the same time as the cows," she said.

A church member, Lesego Sebolao, said she used the water to perform the orders she received from a prophet at her church.

The villagers said they would not engage in a protest but were pleading with the municipality.

"How long are we supposed to live like this? Here in Kgomola we have not tasted the fruits of democracy," they said.

Ditsobotla municipality spokesman Pius Batsile said the municipality was in talks with the Ngaka Modiri Molema District Municipality to provide water in Bodibe.