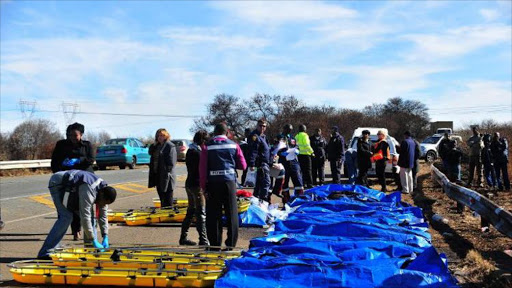 "The truck driver was trying to avoid a stationary vehicle and collided with the oncoming bus."

A bus collision in South Africa late Monday killed 29 people and severely injured 11 others, on a road notorious for deadly accidents, a government spokesman said.

The bus collided with a truck near the town Kwaggafontein 100 kilometres (60 miles) east of the capital Pretoria.

Three of the injured had died in hospital, while eight others were still critical and another 12 slightly hurt.

The bus was traveling from Pretoria when it collided with a truck which had swerved out of its lane, said Mabuza.

"The truck driver was trying to avoid a stationary vehicle and collided with the oncoming bus," he told AFP.

"We are not sure if the truck driver and the bus driver survived the accident," he added.

The injured were taken to hospital in nearby KwaMhlangu.

The bus company's name was not immediately available.

Known as the Moloto road for one of the towns along its way, the route is notorious for deadly collisions.

Around 50,000 people commute to work in Pretoria daily along the narrow and potholed route, using 635 buses.

Transport vehicles using the road are often overloaded and unroadworthy while drivers are prone to speeding.

Last month 18 people were injured in a collision on the route, while news reports about deadly accidents are frequent.

Last year religious leaders held a prayer service for the safety of the road. A radio station also dedicated a day to profile its dangers during which a provincial minister committed to improve conditions.

In September 27 people died when a heavy-duty truck crashed into traffic near eastern city Durban, while 24 were killed when a double-decker bus crashed into a mountainous pass near Cape Town in March.