'I want them raped and killed in jail' 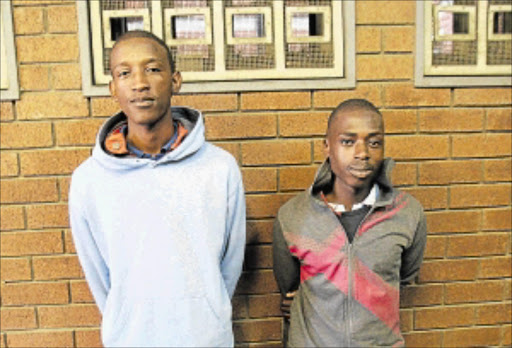 HEINOUS CRIMINALS: Patrick Radebe and Sipho Mbhele were sentenced to five life sentences and 24 years in jail each by the Vereeniging Regional Court for rape and murders Photo: Veli Nhlapo

"I WANT them to be raped and killed in jail," said a grieving mother, referring to the two men convicted by the Vereeniging Regional Court of the murder of members of her family nearly two years ago.

On October 1 2011, Antonio Viana, his wife Geraldine and their 12-year-old son Amoro José Viana were killed by their gardeners at a plot in Walkerville in the Vaal.

Sipho Mbhele, 20, and Patrick Radebe, 23, were sentenced to five life sentences and 24 years in jail each.

"I welcome the sentences even though this will not bring my children back," said Dryer. "Patrick Radebe was raised by my family since he was five, and they took him as one of their own."

Mbhele and Radebe, together with Siphiwe David Motaung, broke into the Vianas' house. When Antonio arrived and surprised them, Motaung fled, leaving Mbhele and Radebe behind.

The pair hacked him 12 times on the head with a panga and took his pistol.

They then dragged him upstairs and drank alcohol while they waited for his wife and child to arrive home.

When Geraldine and Amoro José arrived, they were assaulted and dragged upstairs, where the two repeatedly raped Geraldine and later stuffed an empty liquor bottle into her vagina.

They broke Amoro José's neck with their bare hands, filled a bathtub with boiling water and threw him inside, where he later died.

They then shot the couple, execution-style, in the head.

They fled in the family's Hyundai Getz, laden with stolen goods worth R150000.

Willemse said in her 28 years experience as a magistrate, she had never dealt with such a brutal case.

"This court will forever remember this case as one of the most brutal cases it had dealt with. You have defied the moral fibre of respecting society. You should be removed from society forever," Willemse said.

Motaung was sentenced to 20 years for housebreaking and robbery last year.