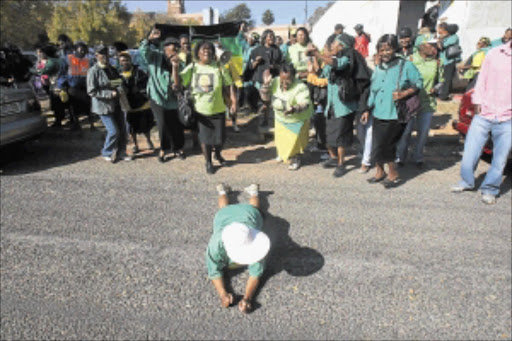 TAKING TO THE STREETS: A group of ANC Women's League supporters protest outside the Roodepoort Magistrate's Court yesterday.

"If anyone is caught with that video, viewing it or posting it on Facebook, they are committing a crime and can be charged for child pornography"

NATIONAL Prosecuting Authority spokesman Mthunzi Mhaga has warned that any member of the public found viewing or being in possession of the video of the Soweto teenager being gang-raped will be prosecuted.

"If anyone is caught with that video, viewing it or posting it on Facebook, they are committing a crime and can be charged for child pornography," he warned.

Mhaga also said there was no exception for the media.

"Whether the video is put up on their website or images are extracted from it, it is still a crime," he said.

Mhaga was speaking outside the Roodepoort Magistrate's Court yesterday where seven men briefly appeared after being arrested for gang-raping a mentally-disabled 17-year-old girl from Braamfischerville in Soweto and recording the incident and then distributing the video.

South Africans continued to react with shock at the incident yesterday, particularly at the violence and total disregard for the girl's dignity.

The ANC Women's League protested outside the Roodepoort Magistrate's Court in support of the victim.

Gauteng Premier Nomvula Mokonyane said: "As a mother I am more than disappointed and repulsed that some of the alleged rapists are mere youngsters but still had the cheek to record their revolting actions and distribute the video to the public."

In a preliminary charge sheet based on the video, the accused are facing charges of rape, sexual assault, engaging in sex with a minor for a reward, using a minor to create child pornography, committing a sexual act in the presence of an adult and with regard to the Film and Publications Act, possession, creating and distributing child pornography.

Since minors are being accused, journalists were not allowed inside the courtroom.

Mhaga said: "In relation to the Child Justice Act the case will be held on camera and members of the public and the media are not allowed inside."

He also mentioned that the case has been split in two where minors will be prosecuted separately and with a different legislation as the adults. Further investigations are expected and a preliminary inquiry will be held once substantial evidence has been accumulated.

All seven suspects remain in custody, with the minors kept at a youth facility and they will appear in court again next Wednesday.

The teenager disappeared for over three weeks and was found last Wednesday in Doornkop with a man who was also arrested and will appear in court today.

He was charged with kidnapping and rape. The teenager is currently kept safe at an unknown location and her mother is still under investigation to determine whether she should be charged.

But Mhaga said: "We are waiting for a psychiatric report to confirm whether the girl is mentally disabled."