'They are good boys. Can it really be them?' 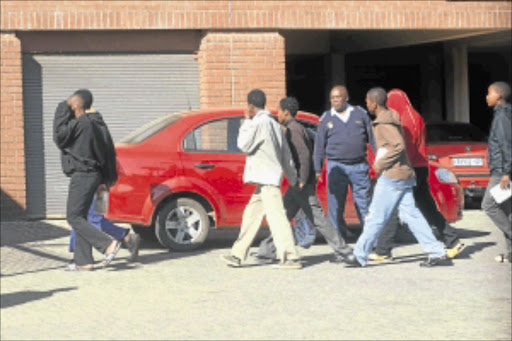 UNDER ARREST: A policeman watches over seven boys who are accused of gang-raping a mentally ill Soweto teenager. PHOTO: VELI NHLAPO

GOD-FEARING, kind hearted, good, hard-working are the descriptions emerging from friends and relatives of the seven young men who have been accused of gang-raping a mentally disabled teenager in Soweto.

Their bewilderment comes against the backdrop of national outrage at what they have been accused of doing — video- taping the prolonged rape of a 17-year-old with the mental capacity of a five- year-old.

Battling emotions as she gripped her hands tightly together, the grandmother of one of the accused teenagers — sitting on a bench outside Roodepoort Magistrate’s courtroom E — yesterday described her grandson with a sad smile around her mouth. This was just before he had been brought into court under heavy police guard.

“He is not bad. He can’t have done this. This is not my boy. It is some mistake. He can’t be this monster people say he is. I know that he is not evil,” she said.

Her battle to comprehend his alleged atrocity came as the friend of another accused told of that family’s refusal to accept their son’s role in the alleged assault.

“It is just not true. It cannot be them who did this. They are good boys. They are little children. Can it really be them? Did he really do this terrible thing,” she asked.

Their desperate search for answers as to what made their “good boys” go bad, came as dozens of ANC Women’s League members and women and children’s rights activists bayed for the blood of the accused outside court.

Their anger was expressive and crude at times. One green-uniformed league member held aloft a poster that read: “Monsters. Cut the penis. No bail.”

Other demonstrators called for them to be necklaced and their homes torched. They vowed to hunt the young men and their families down should they be released.

“Why must we listen to government? Government has said we must not take the law into our hands, but when this happens and continues to happen, with police doing nothing to help us, we will not listen.

“We are going to burn them. We are going to bring back the ‘necklace’ and show them what we do to such monsters,” said ANC Women’s League ward 49 secretary, Albertina Sishuba.

But the search for answers and clues as to what could possibly turn “God-fearing” young men into a frenzied gang of rapists, has led to startling insights into what could have led them to commit this crime.

Jewkes said that, in Gauteng, 7% of men had been involved in gang rapes while in the Eastern Cape and KwaZulu-Natal it was 9%.

“The studies showed gang rapes were carried out by young men either as a right of passage or by men seeking entertainment and testing their boundaries and power over women.

“What is happening is a frightening and very common problem which is increasing as older youths teach and show younger children how to carry out these horrendous acts.

“The most common motivation is that it is fun and that the rapists, who do not see themselves as monsters, are entitled to do what they do with vulnerable women specifically targeted,” Jewkes said.

“What parents forget is that children become adolescents with one of the key elements of this phase being experimentation and the testing of boundaries and the consequences of their actions.

“Along with this every person has two identities: one which is your personal identity which you show your parents and your teachers and the other your social identity which comes out when you are with friends.

“Combine these elements with the group psyche, a strong ‘leader’ and a vulnerable victim and you have the perfect recipe for deviant behaviour. It doesn’t matter if the victim is mentally disabled. In fact, this makes her an even more attractive target,” Bezuidenhout said.

Sonke Gender Justice Network spokesman Mbuyiselo Botho said South Africa’s tolerance of sexual violence had led to an increase in attacks, “which are being carried out with impunity”.

“These attacks are carried out because of a sense of entitlement which exists among men.

“In South Africa, women are fair game with men carrying out attacks because they know they will get away with it.

“The group mentality around gang rapes comes from young people wanting to prove themselves as real men, masculine, strong and in control.

“The thinking is that to be in control you must conquer a woman, with those involved in such rapes feeding off and affirming each other’s bravery and dominance.

Botha said the “ritual- like” attacks were becoming worse.

National Prosecuting Authority spokesman Mthunzi Mhaga said the case had been postponed for further investigation, with the minors placed in protective custody.

“The investigations are at an infant stage. We are obtaining a psychiatric report into the girl’s mental status as we do not know if she is mentally unstable.

“We also have to determine the conditions for any possible release in respect of the minors,” he said.

The seven will appear in court on Wednesday on preliminary charges of rape, sexual assault, engaging in sexual services of a minor for reward, using a minor to create child pornography, committing a sexual act in the presence of minor. They will also be charged with the contravention of the Films and Publications Act by creating, possessing and distributing child pornography.