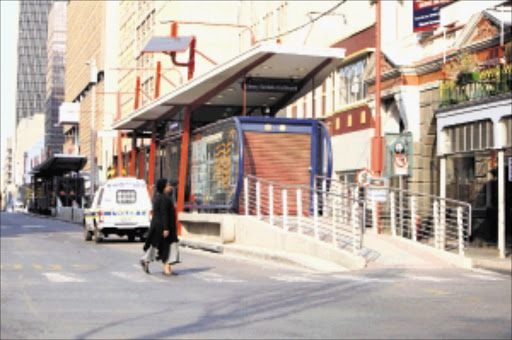 THE eight-week strike by Rea Vaya BRT bus drivers has forced about 35000 commuters to use alternative transport including minibus taxis and trains, thus digging deeper into their pockets.

The cost-effective BRT routes include those between Jabulani and Maponya Mall. A BRT bus ticket costs R3,70 a trip while taxi fare is R6,50.

For people travelling from Orlando East on a BRT bus, the fare is R6,50 a trip while a taxi costs R7.

Phetheni Sikhakhane of Dlamini 2, who catches a BRT bus at Thokoza Park, Rockville, on her way to Market Street in Johannesburg, says she leaves her house at 6.30am and arrive in Johannesburg at 7.30am.

She starts work at 8am.

"The BRT is faster. Whenever I use a taxi, I have to wake up at 5.15am and arrive at work at about 7.15am. If there is traffic congestion, I usually arrive late at work," she said.

Sikhakhane, 25, cannot wait to see an end to the strike.

Yesterday she recounted how the strike has affected her pocket, and complained about the increased travelling time between home and her work place.

The client attendant at a bank in the Johannesburg city centre said she has been forced to readjust her budget to accommodate taxi fare.

"I usually catch a BRT bus at Thokoza Park. A single trip costs R7,30. The bus drops me close to work. With the taxi, I pay R9 in the morning and R10 in the afternoon. This is a lot of money," Sikhakhane said.

She said she sometimes reported at a branch in Braamfontein. With a BRT bus, she said, it was easier because she would get a connecting bus in the inner city, at an additional cost of R3.

Piotrans, a private company contracted by the City of Johannesburg to provide BRT service, admitted the strike has let down commuters who have been using the service for the past two years.

Piotrans spokesperson Eric Motshwane said yesterday that the worse affected commuters were those who travel within parts of the city which has no other means of public transport.

"We have issued statements apologising to our customers about the strike. It has mostly affected people living in areas which do not have other means of public transport.

"These are mainly school children who have now been forced to catch more than one taxi to reach their destinations. This means more cost to them," Motshwane said.

He said the strike has worked against the very purpose of the project, which is to reduce travelling time.

The SA Municipal Workers Union, which represents BRT bus drivers, would meet Piotrans today at the SA Road Passenger Bargaining Council for mediation. Both parties were optimistic yesterday that they might find a solution to end the impasse.

Among several demands, workers are demanding a monthly salary of R15000, as opposed to the current R8000.